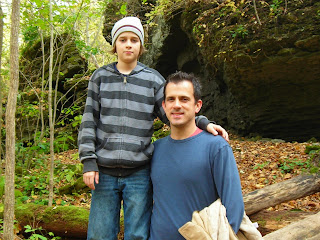 (Tim and his son, Jake)
For awhile now I have been wanting to interview Tim Gombis, associate professor of New Testament at Cedarville University, Cedarville, Ohio. When I was doing my "Getting to Know..." series of interviews where I would interview an up and coming New Testament scholar, Tim and I planned to do an interview at that time. That was about two years ago! The timing just was never right.

Now, however, the timing has never been better, with Tim publishing a wonderful and provocative book entitled The Drama of Ephesians: Participating in the Triumph of God. This book is a rarity in that it has the potential to transform the reader's life and should be read repeatedly. Tim brings Ephesians to life, calling us to take on the cruciform character of our risen Lord, modeled in the life of the Apostle Paul, in order to transform our communities.
Without further ado, here is the interview I conducted with Tim on this volume:
1. Talk about how The Drama of Ephesians grew out of your dissertation at St. Andrews under Bruce Longenecker where you studied the concept of divine warfare in Ephesians.

I had the most wonderful experience in St. Andrews. Not only was Bruce an excellent supervisor, but the town is just the most lovely spot on the planet. We lived just over a mile from St. Mary’s College, which housed the Divinity faculty, and I mostly walked to and from work each day. Those walks afforded me time to think through what I had been studying all day, not only the logic of the text and interpretive arguments, but to revisit the rhetorical force of the text. It was difficult to rehearse all of that daily and not be struck by the transformative power of the epistle. Quite frankly, writing the dissertation transformed the manner in which I related to my wife and kids, how I conceived of my relationships, and how I envisioned my future, along with so much more. So, while the dissertation took the shape it did as an academic work, I planned to write a separate work to communicate what I had seen in Ephesians to a wider audience. This book took shape during that long and wonderful “conversion of the imagination,” to use Richard Hays’s phrase.

2. Your main goal in this book is to perform ‘a dramatic reading’ of Ephesians (9). Could you explain how this differs from the typical way Ephesians is mined for doctrinal truths in order to produce a coherent theological system?

Christians sometimes fall into the habit of reading the Bible as a resource for something else—something outside of the Bible, like a doctrinal system. So, we see Paul mention justification in Galatians 2 or Romans 3 and we call to mind our doctrine of justification and note mentally that these passages are ones that can be utilized when speaking of that doctrine. Any part of Scripture, then, becomes a collection of bits of data to be taken elsewhere and arranged along with loads of other bits to create something else.

But we seldom imagine that there are narratival and theologically rich trajectories in Scripture, even in Paul’s letters. We need to learn to read “across” the text to determine these trajectories and then immerse ourselves in them to see how the gospel that Paul articulates to churches in Rome or Asia Minor might rebuke, redeem, and transform us. It’s a far more compelling exercise to find ourselves as characters in these gospel narratives, trying on different roles and gaining wisdom for creative Christian action in the world.

3. The “powers and authorities” play a powerful role in Ephesians (1.20-23, 3.10, 6.10-18). How does an understanding of the Old Testament and Second Temple Jewish texts shed light on these figures?


People across time have looked out at their world and noticed that things are broken in ways that are greater than the sum of all human decisions. There are small-scale injustices, but there are also massive and trans-national systems of oppression on a massive scale that boggles the mind. Contemporary social scientists, political theorists, and economists have a variety of modern tools for describing and predicting these phenomena. The ancients noted these dynamics, too, and saw the work of rebellious supra-human figures at work. The Old Testament manifests such a worldview, developed and extended in a variety of Early Jewish texts. All of this, obviously, shaped Paul’s view of an open cosmos, so he utilizes this language when speaking of how the world is broken on a range of levels and in a variety of ways. The challenge is translating this language to a scientifically determined worldview. But just to say that this conceptual framework provided a way for Paul to speak of community habits and individual behaviors that partake of larger matrixes of corruption, and, alternatively, habits and behaviors that draw upon and radiate God’s presence.

4. You speak of some responsible and practical ways we are to engage these powers (48-58). What are some of the biggest misconceptions regarding engagement of these entities and what can we learn from Paul’s stance when he is read faithfully?

I think the biggest misconception is that we engage them directly. Another might be that they have direct influence over our brains. For Paul, they are figures behind the perversions of cultures and the large-scale systems of oppression we see in the world.

Paul makes reference to these figures only to note that the cosmos is broken on more levels than we typically imagine. He doesn’t focus on them directly as objects of fascination in themselves. And we do not encounter them directly. The church is called to identify the powers’ malignant influence in the world by naming practices of exploitation, oppression, manipulation and destruction, and then to resist conforming to these practices and patterns. God has sent the Spirit to form New Creation communities that embody together the self-giving and cruciform life of Jesus on earth. That is our engagement with the powers—naming and resisting.

5. How should we understand the ‘in Christ’ language that so pervades Paul’s description of the union of Christ and believers in Ephesians 1.1-14?


Paul’s phrase is meant primarily to indicate our new cosmic location. We are no longer ‘in the world’ or ‘in death’ in the sense that we were formerly enslaved to destructive patterns, cut off from the life of God. We are now ‘in Christ’, subject to the transforming power of God’s Spirit and united intimately with God and God’s people.

Paradoxically, this means that we are now truly ‘in the world’, since we are now set free to inhabit creation as humanity was originally meant to. In this sense, the ‘in Christ’ language functions along with Paul’s ‘new creation’ language.

6. You describe Ephesians 1.20-2.22 as being structured according to the pattern of divine warfare (86). Could you discuss how the church fulfills the temple-building component of this pattern?


The pattern of divine warfare in the ancient world runs broadly as follows: A deity goes out to conquer, triumphs, and returns to build his temple, the symbol of his triumph. His people then gather at the temple for worship and celebration of his sovereign reign.

Paul utilizes this pattern in proclaiming the triumph of Christ over the hostile cosmic forces, but Christ does not gather his people to his temple. He gathers them as his temple, which he fills by the Spirit. The church then—the multi-ethnic people of God—is the symbol of God’s triumph over the powers. This is indeed a rich ecclesial notion and Paul wonderfully exploits it for all its worth. The triumph of God is magnified on a cosmic level when God’s people are unified. When we are fractured or don’t pursue unity as we ought to, the glory of God’s triumph is diminished. But, as Bruce Longenecker says, when churches are unified and when former enemies embrace as reconciled friends, the victory and supremacy of God is advertised to the cosmic powers of darkness.

7. Could you talk a bit about Paul’s cruciform role in Ephesians 3.1-14, and how as actors in the gospel drama what are some of the ways we are to model ‘power in weakness’?


This was the most powerfully transformative passage for me personally. It is so utterly counter-cultural and counter-intuitive. We imagine that we will succeed personally and professionally through self-assertion and will advance in our careers (or in ministry!) through power-accumulation and the exercise of power over others.

I believe this is what Paul is getting at in Ephesians 3. His imprisonment is not a set-back, but the perfect place for God to magnify his triumph over the powers. God builds his church through the preaching of this shamed prisoner, this ‘least of all the saints’, rather than through someone with loads of social or political capital. For Paul, this makes perfect cruciform sense, and it is one of a number of passages that sets the normative ethical pattern for Christian existence.

How do we model that? By cultivating postures of servant-hood and humility in relationships, never exercising power over others nor relating manipulatively. For those who are well-practiced in (self-)destructive relational modes, our repentance is a bit more painful! But the way of life is the way of the cross.

8. Much ink has been spilled on the famous ‘armor of God’ passage in Ephesians 6.10-18, and many have used this text to justify militant political views within the church. How does a proper reading of this passage subvert the common militant one?

Yes, sadly, in our heated political climate this passage is tragically hijacked to speak about the necessity of battling this or that political opponent. Paul makes clear, however, that we aren’t battling against other humans or political parties!

Our cosmic warfare is truly performing the script of Ephesians—embodying the ‘ethical’ vision of the entire letter. This involves cultivating postures of humility toward outsiders, living cross-shaped lives of peace-making, seeking to shape our churches into communities of joy and justice, realizing that we are only good for the world when we are the first in line to repent and receive God’s grace.

If the powers of darkness, according to Paul, are seeking to transform the church into just another institution that seeks power, exploits, dominates, oppresses, and hurls vitriol at its enemies, then our cosmic warfare is to resist this and imagine alternative strategies for participating redemptively in our surrounding cultures.

9. After reading this volume, I realize two things immediately. One, pastors and leaders need to engage your volume in order for the message of Ephesians to be captured within their faith communities. Second, this is a book that needs to be read more than once, as there are many profound and practical insights of which the reader needs to be reminded.


What is your hope for this volume?


I hope the book sheds light on Paul’s cosmic vision of God’s redemptive mission and how communities are empowered to participate in that. I hope that it expands the horizons of readers’ imaginations so that they see that God’s salvation is huge—cosmic in scope. At the same time, it is embodied and performed in the simplest acts of humility and self-giving love. God’s resurrection power is overwhelming and overpowering, but we get in on it when we reconcile, forgive, transform strangers into friends, and love one another in the name of Jesus.

Thanks, Tim. This interview was well worth the wait!
Posted by Matthew D. Montonini at 9:47 AM

Thanks for this. Great interview!

Holy cow this is exciting stuff. Would love to have heard how some of the earlier evangelical redemptive-historical stuff; Andrew Lincoln; church-as-temple, etc. come into play in this work.

But I'll find out shortly after SBL...

Great interview. I am really looking forward to reading this book!