In a previous post  I gave my initial impressions of Grant Osborne's new commentary on Matthew (ZECNT).

In this post I will assess the different features of the commentary proper and show how Osborne utilizes them in a specific unit, namely, the beginning of the body of the Sermon on the Mount, Matthew 5.17-20 (179-185).

Each section begins with the heading Literary Context, with the goal of situating the scriptural unit with what precedes and follows, while also demonstrating how the passage fits in this case to the Gospels overall agenda.
Here, Osborne states that the central issue of Matthew 5.17-20 is Jesus' kingdom teaching relates to Torah (179). Torah is demonstrated to be "caught up and fulfilled" in Jesus' kingdom teaching (179).

Included in this section is a box that shows an outline that displays the larger and smaller units to which these passages belong (179).

Next, another heading, Main Idea, describes in a one or two sentences what this passage is all about. Regarding Matthew 5.17-20, Osborne writes: 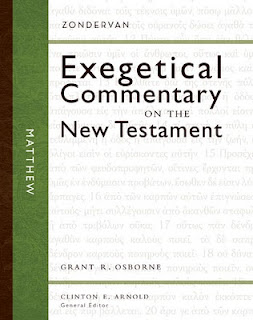 The scribes and Pharisees had developed the oral tradition in order to explicate the law more clearly for the people; they wanted to make its meaning evident on the practical level of living rightly. Jesus is saying in effect that they have failed to do so. Only he can 'fulfill' it, that is, bring it to its intended end or goal (179).

Incidentally, I find that this component of the commentary could be most useful to the pastor, in that, the "main idea" brings a focus to the big picture of the passage, thus helping the pastor or bible study leader frame their sermon/lesson more expediently and decisively.

Following the main idea is the Translation. It is hard to do this section justice, because its strengths lie on the visual department which cannot be replicated here. Nevertheless, the first part of Matthew 5.17-20 appears something like this:

What my reconstruction in this post fails to capture is that the passage is framed by a box, the bold face font is in gray, and numerous lines are drawn to show the relationship between lines. For instance, Osborne draws a line from "disappear" in 18b to "until" of 18c.

Structure and Literary Form provides the reader with a summary of how the flow of thought proceeds. Here, Osborne cites favorably Guelich's  reading (Sermons on the Mount, 134-135) that these sayings of Jesus can be deemed as an "I have come" (ἦλθον) saying (v.17), a legal saying (v.18), a sentence of holy law (v.19), and an entrance saying (v.20; 180). These saying fit the pattern where Jesus challenges the legal assumptions of the Jewish leaders. Moreover, "Jesus' conclusion and the transition to his study of ethical righteousness in vv.21-48 are the basis of his proclamation that his is a superior form of righteousness to that offered by the leaders (181).

Another very helpful feature for the pastor/teacher is the Exegetical Outline. The passages overall structure is displayed here and again needs to be seen to be appreciated. Here is a partial rendering:

Finally, the text proper comes into view. The author's translation comes first in boldface font (e.g. 5.17 Do not think that I have come to destroy the law or the prophets) followed by the Greek text in regular font (Μὴ νομίσητε ὅτι ἦλθον καταλῦσαι τὸν νόμον ἢ τοὺς προφήτας). This choice it seems is to give those with limited or "rusty" Greek an aid in piecing together the phrase(s). It should be noted however, with regard to the Greek, that exegetical discussions require some felicity on the part of the reader and are best suited for those who have had more than one year of Greek. That is not to say that the average reader cannot benefit greatly from these sections, after all there is plenty good exegetical discussions that all may benefit from.

The last section focuses on application and is entitled Theology in Application. Here, the theological message of the passage is summarized as well as its contribution to the broader areas of book and canon as well. This is followed by a focus on how this passage might speak to today's church. For this particular unit, Osborne has 3 separate headings: 1. Jesus Fulfilled the OT in His Life and Teaching (184-185); 2. The OT is Still Part of the Canon and Should Be Preached Directly; 3. The Disciple Must Live Rightly with High Ethical Standards (185).

My overall impression of this work is that one, this will be a commentary that is possibly the most useful for pastors/teachers due to its repeated focus on driving the reader back to the text. This does not mean that this will take the place of other Matthean

Second, Osborne does a tremendous job of distilling massive amounts of information for the pastor-teacher in that he refers to the major interpretive issues and the major players in the debate. For instance, when Osborne provides an overview of the Sermon on the Mount (5.1-12), he addresses the question of its relationship with Luke's Sermon on the Plain, asking "Are they the same sermon (Origen, Chrysostom, Calvin, France, Carson, Hagner) or two different messages (Augustine, Morris)?" (160).

In sum, I believe that when folks bemoan the plethora of commentaries on the market it is due usually to the perception that the commentator cannot add anything that has not already been said, so why go out and purchase another? The Zondervan Exegetical Series turns this notion on its head by offering the reader unique conceptual components that is aimed primarily to pastors/teachers, while simultaneously remaining conversant within scholarly circles. Grant Osborne's Matthew is an excellent addition to an already crowded market of commentaries on this wonderful Gospel.

I'm really excited about this series, so thanks for your thoughts. I just ordered Schreiner on Galatians, so I'll try to post some of my own thoughts when it comes.