Got Milk?: Epictetus, Paul, Hebrews, and Peter on Maturity

I know this has mentioned many times before, but I found it interesting nonetheless. I was reading a discussion of Epictetus' concerning the student of philosophy who is not prepared to put his/her beliefs into practice, concerning, namely, their perceptions and attachments to what is considered "good" or "bad".

[34] "Will you sit down and cry like an infant (ὡς τὰ παιδία;)? Did nothing that you heard and studied in school get through to you? Why did you advertise yourself as a philosopher when you might have told the truth: 'I made it through a couple of primers, then read a little Chrysippus- but I hardly crossed the threshold of philosophy.' [35] How can you associate yourself with Socrates, who lived and died as he died, or with Diogenes? [36] You cannot imagine either of them reduced to tears or tantrums because they weren't going to see this man, or that woman, or because they had to be in Susa, say, or Ecbatana, rather than Athens or Corinth... [39] Like a child (τὰ παιδία), it's high time that you were weaned off  milk (ἀπογαλακτισθῆναι) and started taking solid food (καὶ ἅπτεσθαι τροφῆς στερεωτέρας)- or put another way, it's time you stopped crying for your nurse and mother (μάμμας καὶ τιτθάς) 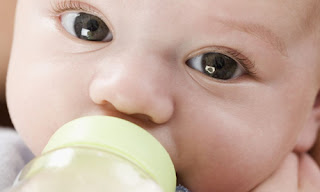 Similarly, the idea of becoming spiritually mature in the New Testament uses these same stock images. For example, Paul addresses the Corinthians concerning divisions in the church over leadership:

Brothers and sisters, I could not address you as people who live by the Spirit but as people who are still worldly—mere infants in Christ (ὡς νηπίοις ἐν Χριστῷ). 2 I gave you milk, not solid food, (γάλα ὑμᾶς ἐπότισα, οὐ βρῶμα) for you were not yet ready for it. Indeed, you are still not ready. (1 Cor. 3:1-2; NIV)

We also find this imagery being used in Hebrews, which proves to be even more similar to the Epictetus passage above, when the author states concerning the subject of apostasy:

We have much to say about this, but it is hard to make it clear to you because you no longer try to understand. 12 In fact, though by this time you ought to be teachers, you need someone to teach you the elementary truths of God’s word all over again. You need milk, not solid food! (ἔχοντες γάλακτος [καὶ] οὐ στερεᾶς τροφῆς)13 Anyone who lives on milk (πᾶς γὰρ ὁ μετέχων γάλακτος), being still an infant (νήπιος γάρ ἐστιν), is not acquainted with the teaching about righteousness. 14 But solid food (ἡ στερεὰ τροφή) is for the mature, who by constant use have trained themselves to distinguish good from evil. (Hebrews 5:11-14; NIV)

Lastly, we come to Peter's admonition for holiness:

Therefore, rid yourselves of all malice and all deceit, hypocrisy, envy, and slander of every kind. 2 Like newborn babies, crave pure spiritual milk (ὡς ἀρτιγέννητα βρέφη τὸ λογικὸν ἄδολον γάλα ἐπιποθήσατε), so that by it you may grow up in your salvation, 3 now that you have tasted that the Lord is good.

So what does all this mean? Why did I choose to post about this? Well, namely, it shows once again how important it is to immerse oneself in the social, political, philosophical, religious context of early Christianity. These metaphors, figures of speech, were not constructed in some vacuum wholly unique to the biblical authors, but were rather part of the cultural context of the times. Without coming off too "preachy", this kind of information proves invaluable for those who read the Bible as a self-help guide that speaks only to them and their circumstances. The Bible may have been written for us, but it was not written to us! Ignorance of the cultural context of the Old and New Testaments makes the Bible a static set of writings that serve only to further our indivualistic agendas and impoverish us to the richness of Scripture, and maybe, just maybe, the subtle message here to complete my mini-sermon is 'Grow up! Start eating solids!'