We are definitely living in a privileged age, yet a bewildering one as well. As obvious as that statement seems, I am applying it specifically to the acquisition of the biblical languages, Hebrew, Aramaic, and Greek. The beginning student has never had more opportunities or more platforms to learn these languages. But therein lies the rub? Where to begin? What is the best way to learn? 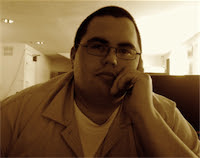 One tool that I believe will change the way Greek is taught, is being pioneered by Danny Zacharias, Lecturer in Biblical Studies and Technology Assistant at Acadia Divinity College. Many of you may recall an interview I conducted  with Danny on his Singing Grammarian. Well, I am happy to say, that Danny continues to push the envelope for the way technology can aid the Greek student in his/her acquisition of the language, with the best application currently on the market, ParseGreek.  Before, I get into specifics, let me just say that I am not the most technologically-savvy individual out there, but with Danny's ParseGreek, this was not a problem, as I discovered operation of the program to be quite user-friendly. I should also mention that I downloaded the program for my Droid Charge. If one is an Apple user, Danny has also provided the platform to download for one's iPhone or iPad, and of course, the aforementioned Android platform as well. One can get this program for the outstandingly low price of $5.99, making this app even more appealing. One would not fault Zacharias for setting the price to $9.99 or more, considering all the work that went into the program, but as one whose main concern is accessibility and affordability, Danny has provided the Greek student few excuses to not purchase this application.

So what is ParseGreek, exactly? Only the most comprehensive Greek vocabulary app available, highlighted by more than 8,700 forms taken from the Greek New Testament. Notice, I wrote forms, as the student will not just encounter lexical forms like most grammars teach, but inflected forms. The advantage to this is simple: the inflected forms are what the Greek student will actually encounter in the text proper. If one is able to recognize these forms, ease of reading is facilitated. ParseGreek should also be noted for its flexibility. One can custom-make quizzes with exact specifications. First, Zacharias has included six Greek grammars that are keyed by chapter to their vocabulary lists. So, for instance, if one wants to be quizzed on Mounce's Basics of Biblical Greek, chapter 4, those words will pop up on the screen and prompt the student to parse and give the definition for that particular word. 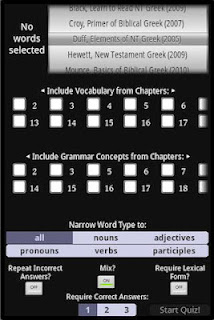 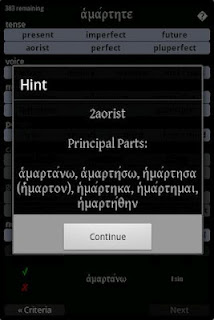 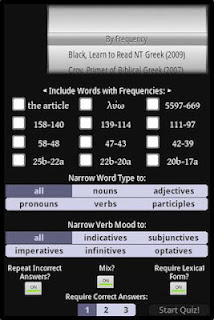 Second, one can ignore the grammar options and search by frequency. As one can see by the screenshot to the right, one can even choose parts of speech and even determine the verb moods on which to be quizzed. One can also set the quiz to provide the student 'hints' i.e. the lexical form of the part of speech along with all of its principal parts as seen to the left. 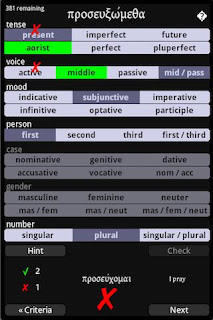 One of the best features of this program in my opinion is the shaded out section of the quiz that allows the student to remove certain parts of speech before answering the question. As seen in the shot above, both "case" and "gender" have been shaded out. This hints to the student that they will not be looking for a noun or a participle in this particular case. This gives the student a big 'heads up' and enables he/she to answer the form much quicker and with more confidence, rather than wasting time trying to determine what part of speech they are looking for.

Much more could and should be said about ParseGreek, but if and when I teach Greek again, I will be requiring my students to purchase this app for their smart phones. It is that good! I only wish I had this tool when I was learning Greek. ParseGreek is Metzger's Lexical Aids for Students of New Testament Greek on steroids! So put away your flashcards and pick up Danny Zacharias' ParseGreek app today. You'll wonder like me, "How did I ever survive Greek without this?"
Posted by Matthew D. Montonini at 1:29 PM

Hi Matt, thanks for your interviews with Danny Zacharias (A Kregel Author). Would you be interested in doing some book reviews for Kregel Academic? Let me know--laurab@kregel.com