'Knowing' in John 3: Jesus and Nicodemus Part I 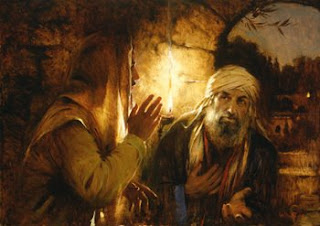 This is the second in a series of posts that I am writing as I prepare for my John class. Again, these notes are based on my observations and not secondary literature. Also I am refraining from reading ahead in order to let the narrative set the pace for these thoughts. For my initial foray into the subject of 'knowledge' in John's Gospel click here.

One of the most famous episodes in John's Gospel and certainly of the dialogues that take place in the narrative, is Jesus' encounter with the Pharisee, Nicodemus at the beginning of chapter 3. The reader/ hearer has just been told at the end of chapter 2 that Jesus, while attending the Passover festival, performed many 'signs' (τὰ σημεῖα; cf. 2.11 ) that the people saw (θεωροῦντες; cf. 1.32) and as a result they 'believed in his name' (ἐπίστευσαν εἰς τὸ ὄνομα αὐτοῦ; 2.23; cf. 1.12). Surprisingly the reader/hearer is told that "Jesus would not entrust himself to them (ἐπίστευεν αὐτὸν αὐτοῖς), for he knew (τὸ αὐτὸν γινώσκειν)all people (2.24). He did not need human testimony about them, for he knew all people (ἐγίνωσκεν; 2.25). The knowledge of Jesus based purely on his performance of signs is clearly not enough.

In steps Nicodemus, a Pharisee (3.1). This marks the third confrontation that a Jewish leader has had with either John the Baptist (1.19 ff.) or Jesus (2.18 ff.). He comes to Jesus at night (νυκτὸς; 3.2). The reader should be aware of the significance of Nicodemus' timing. The prologue mentions that the light shines in the darkness (ἐν τῇ σκοτίᾳ) and the darkness (ἡ σκοτία) has not overcome/understood (καταλαμβάνω; 1.5). So, if one is sensitive to John's literary cue, one can imagine what might happen next. Next, Nicodemus' statement to Jesus in 3.2 is so dense with symbolic import, I will take a moment to unpack it bit by bit on what has transpired in the previous two chapters.

Conclusion: In his opening statement, Nicodemus displays a level of knowledge of Jesus that is at best, partial. This continues a theme already established to this point in John's narrative that complete knowledge of Jesus' identity continues to be elusive to the characters in the narrative, with the exception of possibly, John the Baptist.

The next post will examine the remainder of the dialogue between Jesus and Nicodemus (3.3ff.).
Posted by Matthew D. Montonini at 12:12 AM