From the archives: Frank Thielman on the 'center' of Paul's Theology 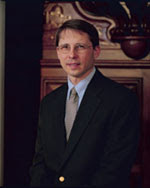 Once in awhile I thought it would be nice to reproduce a thought-provoking piece from my former blog, Pauline Perspectives. This particular post originally appeared on February 27, 2007 and garnered some interesting discussion. Without further ado, to the post we go!

Frank Thielman, Presbyterian professor of divinity at Beeson Divinity School, and author of Theology of the New Testament: a Canonical and Synthetic Approach (Zondervan, 2006), approaches the problem of identifying the 'center' of Paul's theology in this manner:

The confusing variety of proposals probably results from two causes. First, interpreters of Paul who speak of a 'center' for his theology have different understandings of how broad or narrow the chosen 'center' ought ot be. Should the 'center' be some theological principle from which everything else is derived- a sort of theological first cause? Or should we understand the center more narrowly to make it more useful in distinguishing Paul's theology from other Christian theologies? Second, the theological presuppositions of interpreters seem to play a hand in many assessments of Paul's 'center.' Lutherans tend to see 'justification by faith' as the center, Roman Catholics tend to speak of something like 'Christocentric soterilogy,' and Reformed theologians seem to favor 'redemptive history.'
It is possible, however, to overcome these two problems. First, if articulation of a 'center' is to be useful in organizing Paul's occassional and unsystematic theological statements, it seems necessary to focus on a theological theme that is broad enough to account for other important themes, yet not so broad that it becomes useless in articulating the distinctive nature of Paul's theology. (italics mine) If this is right, then 'justification by faith,' although an important subtheme of Paul's theology, may be too specific to do justice to other elements. By contrast, 'Christocentric soteriology' may be too broad to indicate Paul's distinctive concerns since much of the New Testament could fit under this heading.
Second, although presuppositions are unavoidable, it is possible to resist the temptation to vindicate them by implausible readings of the text. One way to avoid the inappropriate incursion of presuppositions into the search for a center to Paul's theology is to insist that our 'center' must be something that Paul explicitly says is important to him. (italics mine) Since Paul is a coherent theologian and we have a large corpus of theologically oriented letters from him, it seems reasonable to expect him to provide us with a 'center' for his theology that will be useful in filling the gaps between his divergent theological expressions.
God's graciousness toward his weak and sinful creatures fills both these criteria (italics original). Although it is an important concern within non-Pauline New Testament texts as well, the extent to which Paul speaks of the gracious nature of God's character is distinctive. It grounds his approach to such widely differing problems as the imposition of the Jewish law on Gentile believers in Galatia (Gal. 1:6; 5:6), a divisive elitism in Corinth that arises from the church's indigenous Greco-Roman culture (1 Cor. 1:26-31), the lagging of the Corinthian contribution to Paul's collection for the poor in Jerusalem (2 Cor. 8:1, 6-7), and, at the end of Paul's life, Timothy's need for encouragement not to be ashamed of the gospel (2 Tim. 1:8-9). It is, moreover, a concept that Paul himself identifies as central to his understanding of the gospel. To set God's grace aside, he says, is to imply that Christ died for nothing (Gal. 3:21) (pp.231-232).

So do you agree with Thielman's assessments? What would you characterize as the 'center' of Paul's theology? Does Paul even have a 'center' and if so how do we arrive at it? Personally, I think Thielman is on the right track here, but I'm curious about your thoughts.
Posted by Matthew D. Montonini at 10:17 AM

It seems to me that the best use of the term 'center' is to name that which all else revolves around. This does not necessarily mean that all else logically stems from it or is grounded in it, but that all finds its proper meaning in relation to it.

And while it is not necessarily what he emphasizes the most in his writings, we can expect to see it crop up when he seeks to ground particular teachings.

But does such a 'center' exist at all. While we can discuss the different emphases of each NT document, can we really identify the theological center not only of Paul, but of James, Peter, John, and the rest in order to distinguish one from another? Should we not expect that the center of each of their theologies would be the same? Do they not all share the common conviction in the truth of the biblical narrative , in its past present and future aspects, and their participation within it? Is this not what their lives, ministries, and teachings revolve around and which grounds them?


In searching for the 'center' of Paul's theology we must ask whether such a task and its results actually helps us understand Paul's writings and his theology and is not simply another exercise in distracting academic curiosity.

Well put. Although Thielman recognizes the fact that Paul's letters were ad hoc documents for contingent circumstances, I wonder if we are pressing Paul's theology too hard b/c of this fact. The best we can do is get glimpses into Paul's theology, even in Romans!

I would think that resurrection is an essentially element.

Its a theme that we see so pervasively in Corinthians and Thessalonians, Romans and even plays an important role in Ephesians, particularly in chapter. Indeed, theme of unity which is so clear in Ephesians is thoroughly grounded in the Messiah's resurrection.