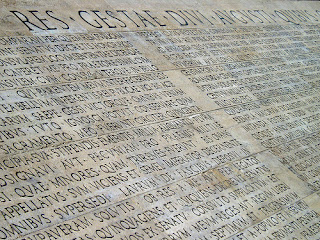 Hans-Josef Klauck in his outstanding The Religious Context of Early Christianity, comments that the Res Gestae Divi Augusti ("The Deeds of the Divine Augustus"), a funerary inscription written by Augustus denoting his achievements as emperor, downplays some of the explicit language used by the imperial cult in Asia. Here, Klauck writes, Augustus is at his diplomatic best, referring to himself by his diplomatic title 'princeps' "and with similar reserve he merely indicates a sacral elevation of his person."(298)
Klauck goes on to write that this was the prevailing attitude of Augustus in Rome. However, Klauck that this reticence to worship Augustus as a god was merely on the surface:

Augustus was not officially declared to be a god during his lifetime, but every possibility stopping short of such veneration was exploited. Augustus was not the direct object of religious veneration, but his 'genius' was venerated, i.e. his benevolent protector spirit, or in abstract terms the genius that guided him. The fact that two laurel trees were set up at his doorposts indicates that a separate object of veneration was his 'numen', the divine power which dwelt in him. (299)

After mentioning that at banquets (both private and public) toasts were made in his honor and that the Senate chose to honor him with the designation "Augustus" translated in Greek to Sebastos, meaning 'sanctified,' 'venerable', 'exalted', etc., The Secular Games were held in 17 BCE "celebrating the dawn of the new age which would once more be governed by ancient values such as fides, pax, honor, pudor and virtus. The Roman tendency to deify abstract concepts favoured the veneration of such entities as concordia, victoria, and pax Augusta." (299)

Moreover, "the pax Romana was seen as the great achievement of the Augustan age; and it was precisely this state of peace, so long unknown until then, that earned Augustus genuine gratitude and veneration." (299)