Gordon Fee on the 'Center' of Paul's Theology 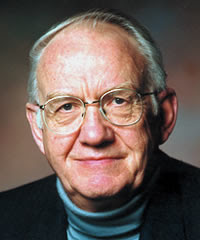 In response to an excellent statement left on the last post, I thought I would see if eminent, Pentecostal New Testament scholar, Gordon Fee, had anything to say about the 'center' of Paul's theology.
As alluded to above, any discussion of Paul's theological center almost always ignores what Paul has to say concerning the Spirit. One scholar who cannot be charged with this is Gordon Fee. In his massive monumental work, God's Empowering Presence: The Holy Spirit in the Letters of Paul, Fee reviews the proposals such as 'justification by faith,' and 'in Christ,' and finds them too limiting.
He writes:

It is my conviction that the reason the center is so 'elusive' is that Paul's theology covers too much ground for one to simplify it into a single phrase. It would seem far better for us to isolate the essential elements of his theology that lie at the very heart of matters for Paul and around which all other concerns cluster. In such a view, at least four items must be included:

To put this another way:

After reviewing the various recent proposals by Pauline scholars, is it possible to arrive at any consensus? Is it possible or even desirable to attempt to articulate the center of Paul's theology? Are the letters too ad-hoc to even make this a possibility? Just some thoughts to ponder...

I made the exact same post as you, completely unaware that you had too:
http://sunestauromai.wordpress.com/2009/02/28/gordon-fee-on-the-center-of-pauline-theology/

I agree with Fee.

And I think is a problem for many evangelicals, they somehow feel a focus on the Holy Spirit is to take the focus off Christ or that the Spirit will mainly point us to Christ so why not just focus on him - when nothing could be further from the truth. Emphasizing the person and work of the Holy Spirit isn't to take from Christ.