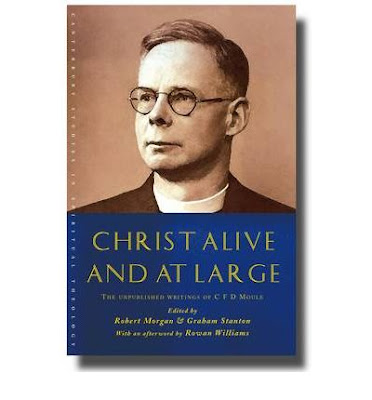 
Here is some welcome news on the horizon:

The renowned Anglican biblical scholar Charlie Moule, as he was popularly known, came from an eminent church and missionary family. He obtained a first at Cambridge and trained for ordination at Ridley Hall where his grandfather was once Principal and where he himself became Vice-Principal at the age of 28. His Cambridge career culminated in his appointment as Lady Margaret Professor of Divinity, a post he held for 25 years, where he influenced a generation of Anglican leaders including Rowan Williams (at whose wedding he officiated), John Sentamu and the late Graham Stanton, his successor as Lady Margaret Professor. Charlie Moule died in 2007. He wrote a number of definitive texts in New Testament studies, but here is not the scholarly professor, but the humble and prayerful man (nicknamed 'Holy Mouley') reflecting widely on Christian practice and belief, biblical questions and contemporary challenges. The text of Rowan Williams' memorial service address is included and his nephew Patrick Moule, provides a preface.
Posted by Matthew D. Montonini at 1:20 AM