Found this quoteworthy from Rudolf Bultmann's treatment of John 1:14a- "The Word became flesh..." 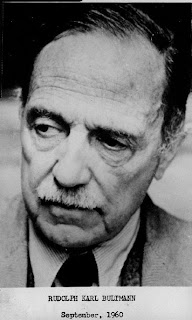 Thus the offence of the gospel is brought out as strongly as possible by ὁ λόγος σὰρξ ἐγένετο. For however much man may await and long for the eve of the revelation in the human sphere, he also quite clearly expects--and this shows the peculiar self-contradiction of man's existence- that the Revelation will somehow have to give proof of itself, that it will in some way be recognisable. The Revealer--although of course he must appear in human form--must also in some way appear as a shining, mysterious, fascinating figure, as a hero or θεοῖς ἄνθρωπος, as a miracle worker or mystagogue. His humanity must be no more than a disguise; it must be transparent. Men want to look away from the humanity to be no more than a visualisation or the 'form' of the divine.

All such desires are cut short by the statement: the Word became flesh. It is in his sheer humanity that he is the Revealer. True, his own also see his δόξα (v.14b); indeed if it were not to be seen, there would be no grounds for speaking of revelation. But this is the paradox which runs through the whole gospel: the δόξα is not to be seen alongside the σάρξ as through a window; it is to be seen in the σάρξ and nowhere else. If man wishes to see the δόξα, then it is on the σάρξ that he must concentrate his attention, without allowing himself to fall victim to appearances. The revelation is present in a peculiar hiddenness. (Rudolf Bultmann, The Gospel of John: A Commentary, [Philadelphia: Westminster Press, 1971]), 63.