Barack Obama to be sworn in using Lincoln's Bible

There is a great article written by Lincoln scholar, Ronald C. White, Jr., author of the recently released, A. Lincoln: A Biography, about how Barack Obama is consciously identifying himself with the presidency of Abraham Lincoln. Obama will even be sworn in using the same Bible Lincoln used during his first inauguration in 1861.

I purchased the book the other day, and very much look forward to reading it. White is also scheduled to speak at Fuller Seminary, and other seminaries later in the year.
Posted by Matthew D. Montonini at 10:59 PM 0 comments

The New Testament in Antiquity: An Interview with Gary Burge 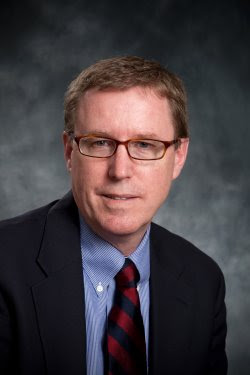 I recently had the chance to interview Dr. Gary Burge, Professor of New Testament, Wheaton College, about his (as well as Dr. Lynn Cohick and Dr. Gene Green's) exciting new textbook entitled The New Testament in Antiquity: A Survey of the New Testament within Its Cultural Context. 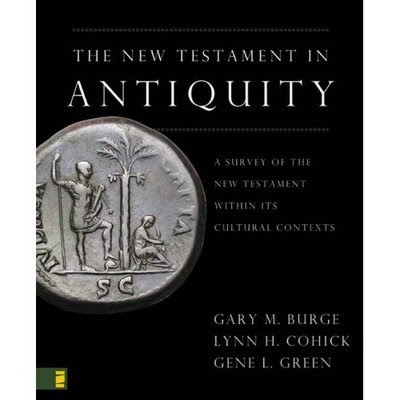 Here is the interview:

1) Talk about the genesis for his particular project. How did it come about and when?


About five years ago, Gene, Lynn and I felt that we needed a different sort of textbook for an introductory text on the New Testament. So often evangelical books lacked the thoroughness our students craved. And in many cases they failed to address the historical, contextual or critical problems we thought were necessary. As we conceptualized the book, Zondervan came on board eagerly and soon we had over ten people -- designers, photo editors, copy editors -- working regularly on the text. The result is stunning and is a true team effort of many people. Every two page "spread" is a carefully designed presentation of written text and illustration. The final volume is better than we ever imagined it might be.


It often happens that academic writing is often inaccessible. Therefore we were careful to write in a way that would engage the student where they were and yet elevate their awareness of the New Testament that dignified their abilities. We tested many of the chapters with a variety of readers, particularly college students and a few graduate students. This helped us hone the text so that it would effectively accomplish its aims. But we wanted more than just a well-written text. We wanted to introduce the student to the contextual setting of the New Testament. We have over 500 carefully researched photos -- many of which have never been used in a textbook before. We have countless sidebars in the text that illustrate either a primary text from the NT world or some cultural feature of life there. Together we hope that the effectiveness of these visual and illustrative materials will make a textbook unlike any other.

3) All three contributors have had cross-cultural experiences in teaching and in ministry. Have these experiences made you more acutely aware how foreign the New Testament World is to our Western culture, and did that help drive your writing in The New Testament in Antiquity?

Each of us have significant cross cultural experience. Each of us have lived in, taught in, and returned to regions of the world that have given us unique cultural sensitivity. For Gene, it is Latin America; for Lynn, East Africa (Kenya). For Gary, the Middle East. These experiences -- combined with over 50 years of teaching experience among us -- have given us a unique commitment to contextual understanding. Simply put, the NT was born in a context utterly foreign to us and the degree to which we enter that world, the more effective we will be as interpreters.


4) One of the messages that you stress in the textbook is how important it is to know the land of Israel. Aside from actually getting to visit, talk a bit about how you attempted to convey this importance to the reader in order to help them understand Jesus' ministry in Galilee for example.


Every society knows its location. Just as the American south understands the effect of the mid-19th century war between the states and Scotland understands the meaning of its history with England, so too, everyone living in Jesus' world knew the difference between someplace like Galilee and Judea. The Decapolis east of Galilee was Greek; lands west of Galilee were Jewish. To live in Sepphoris meant one thing; to live in Caesarea meant another. To understand Jesus' world, we must also understand the many geographical assumptions he and his followers lived with day after day. And when we do, new insights emerge.


5) One of the items that most impressed me in this textbook are the sidebars entitled "Notes From Antiquity." First, how difficult was it to choose the most important ancient sources for shedding light on the NT texts, and second could you give one such example that illustrates how knowing ancient sources helps the NT interpreter in understanding a difficult passage?

Each author reflected on the Biblical narrative they were explaining and then asked what sorts of insights might supplement the text. Thus in our chapter on Luke, one sidebar explains how the debates Jesus has with his opponents are often challenges to public honor. In a shame/honor culture, this was a significant point of leverage in public struggle. On another page, we explain how John the Baptist's baptism compares with Jewish washing ceremonies. To understand what John was offering at the Jordan River, one has to understand the array of ritual ceremonies available to Jews in the first century.
In many cases we illustrate these things by pointing to primary sources generally never seen in such a text. When we discuss Paul's view of marriage in 1 Corinthians, we cite at length a section from the Jewish Mishnah in full in order to compare Paul with Jewish thinking of the era. When we talk about Peter's call to civic duty in 1 Peter 2, two fascinating sidebars talk about "civic benefactors" in the ancient world as a key to understanding Peter. When we talk about Philemon, a sidebar talks about ancient slavery. These are just a few of perhaps 100 places where the text digresses into some fascinating aspect of life in antiquity or an insight into the thinking of a NT author. One sidebar even tells you about how to use a war elephant in an ancient army and a nearby coin minted not long after Alexander the Great gives you a picture of them.


6) The photographs are striking in this volume, particularly the choice for the cover. Could you explain the decision to use this particular image and how it neatly sums up the focus of this book?

On every page we sought to locate photographs that communicated something substantial. We researched photo sources thoroughly and were joined by two photo researchers and a few professional photographers who work in Israel and the Mediterranean. This explains the stunning quality of visuals in the volume. However we knew that the cover photo had to be a gem. We decided to use the famous "Judea Capta" coin minted under Titus to commemorate Rome's defeat of Judea in A.D. 70. The coin shows a Roman victor standing alongside a seated, defeated Jew. Dr. Green is a numismatist (a coin specialist) and he knew a world famous broker in Chicago named Harlan J. Berk. Mr. Berk had one of these priceless coins and he offered to let us use a photo of it. Which brings up another theme. Coins served not only as money in antiquity but as propaganda. We show coins throughout the book (thanks to Dr. Green) and use them to illustrate not only emperors but the regions of the empire.


7) I want to congratulate you all for this wonderful textbook. What would you like to see the New Testament in Antiquity accomplish?


Our hope is that this textbook becomes a widely-used student resource for both colleges and seminaries. It will provide students with a thorough, compelling, inspiring introduction to the New Testament. Too often we think that students know the basics of the NT story. They don't. And this book will provide it. In their endorsements for the book on the back cover, early reviewers said some remarkable things. Darrell Bock at Dallas Seminary and Scot McKnight at North Park University describe The New Testament in Antiquity as the very sort of book they have sought for a long time to teach from. Craig Blomberg at Denver Seminary calls it one the "best introductions" in recent times. Craig says: "If it's backgrounds you want to highlight in a one-semester introduction to the New Testament, this is the text to assign."

Thanks, Gary for your time!

In addition, Koinonia has released an interview with all three authors about The New Testament in Antiquity:

On a Personal Note

A new year has come and I just got news of my grandfather's death about an hour ago. He was 88 years old and living in Idaho with my grandmother. My wife and I had planned to visit the both of them sometime this summer as we felt it would be important to do so considering their advanced age. I had not been able to visit since they moved there a few years ago, and in fact neither of them were able to attend my wedding , so they haven't met my wife, Faith.

I am having a harder time than I thought I would with all of this, especially since he had no major, lingering, health problems considering his age. What bothers me or unsettles me the most is that he had no relationship with God to speak about. It is not my duty to speculate about his eternal destination, but it does gnaw at me nevertheless, and further underscores the importance of praying for and sharing the gospel with one's family members while they are here.

I would like to ask the good folks out in the biblioblogosphere for their prayers; especially for my father, Tony, whom I know will have a difficult time processing his loss.
Posted by Matthew D. Montonini at 10:13 PM 5 comments