C.E.B. Cranfield and the Quote of the Day

I found this to be a particularly insightful quote from the great Charles Cranfield on the importance of the history of scholarship, in this case, Romans, but this could be applied to any other OT or NT text for that matter:

The student of the epistle who consults but a single commentary is perforce involved to some extent in a conversation with St Paul but also with this long exegetical tradition; for every reputable commentary carries a great deal of this tradition-- even if the commentator is himself largely ignorant of the more distant sources of the things which he says. But to gain something more than an altogether superficial knowledge of the course of tradition is to learn a deep respect and affection for, and gratitude to, those who have laboured in the field before one, irrespective of the barriers between different confessions, theological and critical viewpoints, nations and epochs; to learn to admire the engagement with Paul's thought of some of the greatest minds from the third to the twentieth century, but also to be humbled by the discovery that even the earnest and least perceptive have from time to time something worth to contribute; to learn that it is naive to imagine that old commentaries are simply superseded by new ones, since, even the good commentator, while he will have some new insights of his own and will be able to correct some errors and make good some deficiencies of the past, will also have his own particular blind spots and will see less clearly, or even miss altogether, some things which some one before him has seen clearly; and, above all, to learn that all commentators (including those who in the next few pages will be most highly praised and also--and this is perhaps the most difficult lesson for any commentator to grasp--oneself) have feet of clay, and that therefore both slavish deference to any of them and also presumptuous self-confidence must alike be eschewed. (Romans I:I-VIII; 31-32)

Beverly Roberts Gaventa, Distinguished Professor of New Testament, Department of Religion, Baylor University, was kind enough to share the recollections that she delivered at Fr. Brown's Memorial service at Union Theological Seminary in the Fall of 1988.

Gaventa was a student of Brown's when she achieved her M.Div. from Union Theological Seminary, N.Y. You can read her address here.

The kind folks at InterVarsity Press Academic were kind and thoughtful in sending my way The Lost World of Scripture: Ancient Literary Culture and Biblical Authority . The volume is coauthored by John H. Walton, responsible for writing the sections related to the Old Testament, and D. Brent Sandy, who wrote the sections related to the New Testament. The book appears as a successor to the volume, The Lost World of Genesis One, authored by Walton. 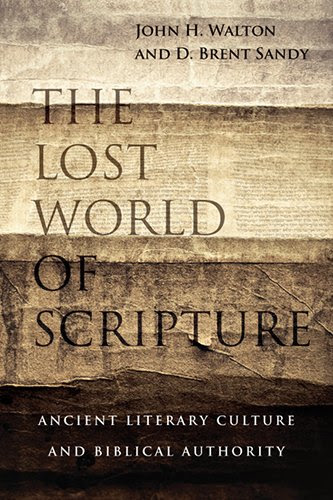 Perhaps a good summary statement of the book's objective is expressed here:

Our specific objective is to understand better how both the Old and New Testaments were spoken, written and passed on, especially with an eye to possible implications for the Bible's inspiration and authority (Preface; 9).

This book might go someway in reframing the inerrancy debate, and give folks like your' s truly, a satisfactory redefinition of a term that has longed for careful reexamination.

Dictionary of Jesus and the Gospels:Essay Review Part I


One of the most difficult topics in New Testament studies today is apocalypse and its corresponding adjective, apocalyptic. As scholars well know, this term is used often imprecisely, frustrating attempts at clarity and nuance. Adding to this problem is the attempt to discover Jesus and the Gospels relationship to these rather nebulous terms.

In the first edition of the Dictionary of Jesus and the Gospels (henceforth, DJG), the entries for "Apocalyptic" and "Apocalyptic Teaching" were divided into two, authored, in the case of the former, by Dale Allison, and in the latter, T.J. Geddert (17-27). In the second edition of DJG, the entries are now combined and are deemed, "Apocalypticism and Apocalyptic Teaching" (23-33). I was delighted to see that Brant Pitre, Professor of Sacred Scripture, Notre Dame Seminary, New Orleans, was given this difficult assignment. Brant is one of the brightest, young, historical Jesus scholars going today, as he is aptly demonstrated in his publication of his revised dissertation, Jesus, the Tribulation, and the End of Exile: Restoration Eschatology and the Origin of the Atonement (Mohr Siebeck; Baker Academic; 2005).

Pitre  begins the entry by noting that "apocalypse" is used in three different ways: 1) As a genre of literature in existence at the time of Jesus; 2) The terms apocalyptic and apocalypticism reflect a social and religious worldview shared by many of Jesus contemporaries and is often reflected in written apocalypse; 3) "apocalyptic eschatology" refers to features of apocalypse and the apocalyptic worldview that focus on the cataclysmic end of the cosmos (23-24). Building off of these nuances, Pitre divides the essay into six parts: 1) Jesus and Apocalyptic Genre; 2) Jesus and the Apocalyptic Worldview; 3) Jesus and Apocalyptic Eschatology; 4) Jesus, the Oliver Discourse and Apocalyptic Language; 5) Apocalyptic Teaching in the Four Gospels; 6) The Apocalyptic Death and Resurrection of Jesus. What follows will be a brief examination of each of these sections.

The first section, Jesus and Apocalyptic Genre (24-25), begins by noting that John J. Collins still provides the most useful definition of the literary genre of apocalyptic, namely  "a genre of revelatory literature with a narrative framework, in which a revelation is mediated by an otherworldly being to a human recipient, disclosing a transcendent reality which is both temporal, insofar as it envisages eschatological salvation, and spatial, insofar as it involves another, supernatural world" (The Apocalyptic Imagination; 4-5; here 24). Second, Pitre notes that the most important texts for studying Jesus' and the Gospels apocalyptic backgrounds are 1 Enoch, 4 Ezra, 2 Baruch, Testament of Moses, and the Apocalypse of Abraham. Further, the book of Daniel is most important for Jesus for four reasons: 1) The Son of Man, 2) the Kingdom of God-"when Jesus speaks of the coming of the kingdom, he is speaking of the Danielic kingdom of God", (25), 3) the suffering Son of Man (Dan 7:13-14, 24-25), 4) "the abomination of desolation" (Mt 24:15; Mk 3:14; Lk 21:20; cf. Dan 9:24-25).

In the second section, Jesus and the Apocalyptic Worldview (25-27), Pitre notes that an apocalyptic worldview is marked by a prominent interest in otherworldly revelation, and in the case of Jesus, his revelations and visions as portrayed in the Gospels are relatively veiled when compared go other Jewish apocalyptic literature (26). Other prominent features of an apocalyptic worldview are the belief in angels and demons, otherworldly realms (e.g. 'heaven', 'hell', 'Gehenna'), and its interest in the end of the present world and the beginning of the world to come (27).

The third major section, Jesus and Apocalyptic Eschatology, masterfully surveys the three major interpretive schools, namely, an apocalyptic Jesus, a nonapocalyptic Jesus, and an eschatological Jesus. The fourth section, Jesus, the Olivet Discourse and Apocalyptic Language (Mt 24-25; Mk 13; Lk 21), argues that much of the Olivet Discourse originated with Jesus himself (29), and that "...one could argue that Jesus saw his death as the Danielic messiah as inaugurating the eschatological tribulation and destruction of the temple" (30). Much recent scholarship of the Olivet Discourse tends to focus the imagery of the Sun and moon being darkened and the stars falling at the coming of the "Son of Man" (Mt 24:29-35; Mk 13:24-27; cf. Lk 21:26).

Finally, Pitre surveys apocalyptic teaching in the four Gospels (30-32), and in a seperate and final section, discusses the Apocalyptic Death and Resurrection of Jesus (32). In the latter, Pitre notes that the unique and controversial Matthean account of the resurrection of the "holy ones" triggered by the death of Jesus (Mt 27:51-53), model the two-fold movement of Jewish apocalyptic eschatology: 1) the sufferings of the righteous in the eschatological tribulation (the so-called messianic woes) are followed by 2) the glorification of the elect in the eschatological resurrection (32).

In sum, Pitre' s entry in DJG II is masterful, in keeping with the high standards of this series, and should be the first port of call for studying Jesus and his relationship to Jewish apocalyptic literature.

Quote of the Day: Brant Pitre on Jesus and the Roman Empire


As a general rule, apocalyptic movements are often intensely focused on earthly powers and political events, especially Gentile powers that persecute the chosen people of God (e.g., Dan 2; 7; 11-12) (Vielhauer). Despite the contention of certain scholars that Jesus is engaged in a direct and extensive critique of the Roman Empire (Wright 1996; Horsley), we do not find anywhere near the same amount of explicit attention given to political events or the pagan empires in the teachings of Jesus as we do in early Jewish apocalypses, or even in the biblical prophets. Apart from a brief teaching about giving to Caesar what belongs to Caesar (Mk 12:13-17), and the forecast of political strife an  'wars and rumors of wars' in the Olivet Discourse (Mt 24:3-8; Mk 13:3-8; Lk 21:5-9), Jesus' teaching in the Gospels as a whole is far more focused on the otherworldly forces behind visible personal and political events--the angels and demons, the kingdom of God, the 'kingdom' of Satan--than on the visible political forces and earthly powers themselves. Earthly political forces apparently have 'no power' except that given them 'from above' (Jn 19:11) (27).


This reminds me a bit of the Barclay-Wright discussions at SBL a few year's ago. Pitre like Barclay, seems to suggest that the "Emperor wears no clothes." What say you?
Posted by Matthew D. Montonini at 12:05 PM 0 comments

A nice surprise came in the mail today, a festschrift that celebrates Beverly Gaventa and her scholarship, The Unrelenting God: God's Action in Scripture: Essays in Honor of Beverly Roberts Gaventa (Eerdmans).

The volume looks excellent, as editors David J. Downs and Matthew L. Skinner are to be applauded for putting together an all-star cast of such luminaries as William S. Campbell, Joel B. Green, Richard Hays, Francis Watson, Martinus C. deBoer, to name just a few.

Especially valuable is the reflection of J. Louis Martyn, who along with Raymond E. Brown, were Gaventa' s professors at Union Theological Seminary. Martyn writes "A Personal Word" that I quote here in full:

A venerable piece of wisdom has it that the true gift to the teacher is the genuine student whose learning process reaches out and engages the teacher, thereby causing both parties to emerge changed, enriched in ways anticipated by neither. Student becomes teacher and teacher student, as both are surprised by new vistas opened up precisely in their instructive comradeship. It is an event of grace; and so it was to be a teacher to Beverly Gaventa. (x).


High praise indeed.  I'm looking forward to digging into this one.
Posted by Matthew D. Montonini at 2:10 PM 0 comments