Johan Christiaan Beker and the Quote of the Day

I found this quote by the great New Testament scholar, Johan Christiaan Beker, both timely and sobering, especially in light of the events of the past week:

It seems to me that, above all else, personal integrity is the necessary condition for the whole theological enterprise. Integration without integrity degenerates into a facile communal consensus; the exploration of the New Testament text without integrity leads to surrendering the truth of the text. Without personal integrity, the student and pastor will sell out either to an opportunistic hermeneutic that looks for ways to satisfy the demands of the marketplace, or to a anachronistic, fundamentalistic hermeneutic that lacks the courage to adapt the text to the current concerns of the world. Integrity requires the courage to be controversial, to face conflict whenever the gospel demands it ("Integration and Integrity in New Testament Studies"; Christian Century, 109 (17); 1992; 515-17, here, 517).

Thomas Boomershine and the Quote of the Day

Thomas E. Boomershine, Professor Emeritus of New Testament and of Christianity and Communications at United Theological Seminary in Dayton, Ohio, has a fantastic quote in his new book, The Messiah of Peace: A Performance-Criticism Commentary on Mark's Passion-Resurrection Narrative (Cascade) on the importance of hearing a story performed orally and what is missed by the modern practice of silent reading and the distance of the reader from the narrative.


One of the reasons why hearing the story rather than reading it in silence makes a difference is that the storyteller narrates the events and the words of the characters in a tone communicating more than factual information, and draws listeners into identification with characters who may be outwardly different. Full engagement with sympathetic identification with the characters of the story is fully possible also with silent reading if readers are attentive to and psychologically open to the clues to the storyteller's invitation. But if readers maintain a high degree of psychological distance in the reading of the story, its actually meaning can become virtually the opposite of the intended meaning, communicated inherently in the structure of the story. The source of that distance, therefore, may be a change either in the self-identity of the listener( from identifying oneself in the post-war first century as Hellenistic Judean to identifying oneself in the post-Nicea fourth century as a Christian) or in the psychological distance to the story(sympathetic hearing to critical silent reading) or both in combination. But, regardless of the cause of this shift, the story can undergo a radical transformation in its meaning. Thus, the story of the man and the woman in the garden can change, especially for male readers and theologians, fro meaning 'we violated God's covenant and our effort to blame it on the woman is a joke' to 'the woman violated God's covenant.' Likewise in Mark's story, the meaning of the story, especially for later Christians who did not identify themselves as Jews, can shift from 'we were involved in the death of the Messiah' to 'the Jews killed Jesus.' (30; italics original)

Labels: Gospel of Mark, Quote of the Day, Thomas Boomershine 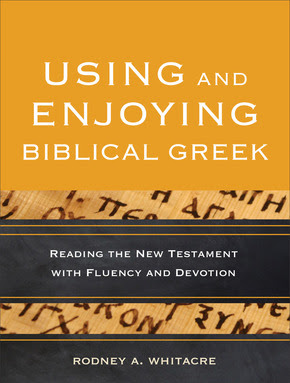 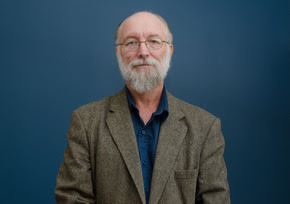 Rodney Whitacre, professor emeritus of biblical studies at Trinity School for Ministry in Ambridge, Pennsylvania, best known for his John in the IVP New Testament Commentary, and his A Patristic Greek Reader is on the verge of another major publication, Using and Enjoying Biblical Greek Reading the New Testament with Fluency and Devotion.  Whitacre's latest publication will be a must-have for students of the Greek New Testament, as his deliberate approach to reading Greek should find a wide audience eager to attempt a new approach at reading facility in the Greek NT.

In addition, I also discovered on Whitacre's webpage, many useful resources, and a free class on Revelation, entitled "The Gospel in the Book of Revelation".