Late last summer when I had the honor of a visit from my friend and mentor, Frank Moloney, he had told me that he was in the stages of producing a book for Baker Academic that would be a guide on how he believes the NT should be read in the church.

Well, I am happy to say, that this volume now has a release date and will be available in April of next year.


Internationally respected scholar Francis Moloney offers a Catholic introduction to the New Testament that shows how to read it both faithfully and critically. The opening chapter and an epilogue directly address the theological requirements of, and historical challenges for, ecclesial reading. The remaining chapters give exemplary readings of the figure of Jesus and of the various divisions of the New Testament canon. Conceived as a resource for religious educators, deacons, and other ministers in the Catholic Church, this book will serve Catholics and others as an ideal supplement to a conventional New Testament introduction or as a companion to reading the New Testament itself.

Contents
1. Catholic and Critical: The Challenge of Scripture in the Catholic Tradition
2. Historical Context: The New Testament World and Our World
3. The Origins of the New Testament: Its Creation and Reception
4. Jesus of Nazareth: A Biographical Sketch
5. Paul: The First Christian Author
6. The Four Gospels: Stories of Jesus
7. The Acts of the Apostles: Telling God's Story to the End of the Earth
8. Later Writings of the New Testament: Letters from Apostles and a Homily
9. The Revelation to John: Apocalypse Now
Epilogue
Indexes
ISBN: 9780801049804
Price: $22.99
Pages: 240

My good friend, Michael Halcomb and Professor of New Testament at Asbury Seminary, Fred Long, have co-produced an exciting, illustrated volume of Mark's Gospel in both Greek and English. This work is produced by the co-founded publishing company by the aforementioned duo under GlossaHouse Publishing.

I am very enthused about this project. Simply put, there is nothing else quite like it out there. Halcomb and Long even produced their very own English translation for this volume. I can see this becoming a great pedagogical tool, which will aid both in learning the Greek text, but will also facilitate memorization as well. The illustrations are outstanding, as they enable the reader to understand the narrative flow of the story.

I am looking forward to getting a copy of this and utilizing it in my own studies. Best of all, Halcomb and Long intend to produce more just like this volume. You can order it here on Amazon.

Below you can view some of the sample pages in order to get a feel for what this volume offers.

Kudos to both Michael and Fred for producing such an exciting work!

During the recent online tributes in which I partnered with EerdWord to recognize the fortieth anniversary of the great Bill Lane's publication of his commentary on Mark (NICNT), my friend and mentor, Frank Moloney, author of the first narrative-critical focused commentary on Mark, shared these words of tribute on my FaceBook wall: 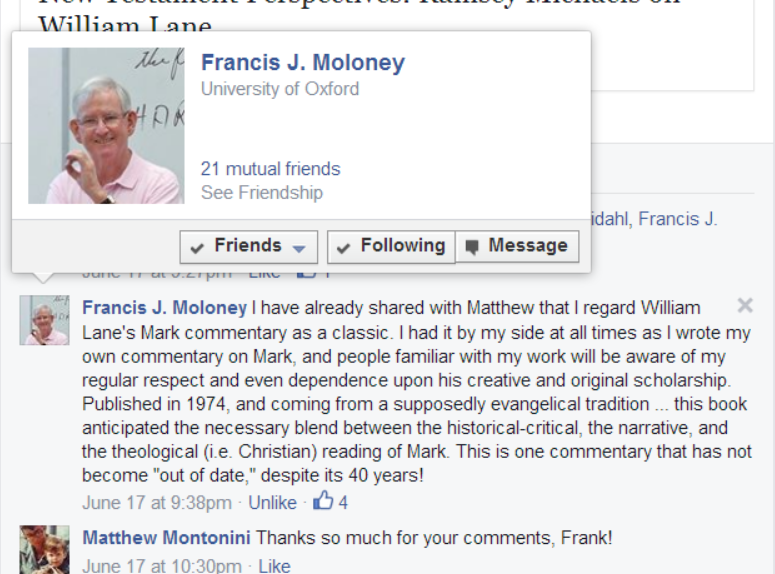 Posted by Matthew D. Montonini at 4:57 AM 0 comments