I have posted them here in order for your viewing convenience.
Enjoy!
Posted by Matthew D. Montonini at 9:00 PM 0 comments


Andrew Lincoln, who has written one of the finest commentaries on John's Gospel in recent memory, has a series of videos on a blog site published by the institution he teaches at, the University of Gloucestershire.

I have placed them here for your viewing convenience:


3. The Water into Wine Miracle


4. The Purpose of John's Gospel


In addition, there are videos on Luke's Gospel by Llyod Pietersen on this site as well as videos from J. Gordon McConville on OT issues. Enjoy!
Posted by Matthew D. Montonini at 12:00 PM 0 comments

The good folks at IVP Academic have released a sneak preview of the forthcoming volume, Paul's Missionary Methods: In His Time and Ours. The preview contains essays by Mike Bird and Eckhard Schnabel. Other contributors to this volume include Craig Keener and Benjamin Merkle among others. This volume is released to coincide with the 100 year anniversary of Roland Allen's Missionary Methods.

Check out the preview here.
Posted by Matthew D. Montonini at 3:54 PM 0 comments

Eerdmans Titles to Look For

There are always a spate of books that come out just in time for SBL. However, there are others that will postdate SBL by a few months, either being released in the late winter/early Spring of the following year.

Here are some of the latter that I'm anticipating from Eerdmans. 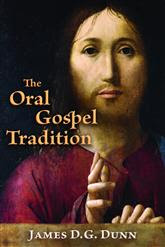 Here are two descriptions that I found concerning this volume:

"The traditions about Jesus and his teaching circulated in oral form for many years, continuing to do so for decades following the writing of the New Testament Gospels. James Dunn is one of the major voices urging that more consideration needs to be given to the oral use and transmission of the Jesus tradition as a major factor in giving the Synoptic tradition its enduring character." -Eerdmans site

"The Synoptic Gospels all share similarities---and discrepancies. How can one explain the "same yet different" character of Matthew, Mark, and Luke? Showing how oral transmission has influenced the shape of Jesus' story in the Synoptic tradition, Dunn examines Q as a source; Matthew's awareness of Markan redaction; the reliance on history, memory, and eyewitnesses; and more."- CBD site

I am rather curious as to how this volume will be different than Jesus Remembered (henceforth JR), perhaps it will be even more refined than the previous contribution considering Dunn wrote JR almost 10 years ago. Nevertheless, anything Dunn writes is worth owning. 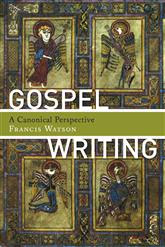 Here is a description: "That there are four canonical versions of the one gospel story is often seen as a problem for Christian faith: for, where gospels multiply, so too do apparent tensions and contradictions that may seem to undermine their truth claims. In Gospel Writing, Francis Watson argues that differences and tensions between canonical gospels represent opportunities for theological reflection, not problems for apologetics. In exploring this claim, he proposes nothing less than a new paradigm for gospel studies — one that engages fully with the available noncanonical gospel material so as to illuminate the historical and theological significance of the canonical." (Eerdmans site). 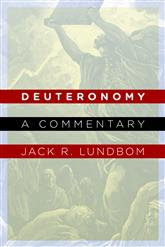 
This commentary is intended for a broad readership wanting to better know and understand this Pentateuchal book that has come to occupy such a prominent place in Judaism and Christianity. For Jews Deuteronomy contains the Decalogue and the Shema -- "Hear O Israel, the Lord our God is one" (6:4) -- supplemented by a code of primal legislation. Deuteronomy is much cited in the New Testament and has come to occupy an important place in the life and doctrine of the Christian church. It lifts up important wisdom themes such as humane treatment and benevolence to the poor and needy and is rich in theology, calling repeatedly on Israel to reject other gods and worship the Lord alone as holy. Besides making use of language, archaeology, and comparative Near Eastern material, Jack Lundbom's commentary employs rhetorical criticism in explicating the biblical text. He also cites later Jewish interpretation of the book of Deuteronomy and makes numerous New Testament connections. An appendix contains all references to Deuteronomy in the New Testament.

Of the making of commentaries there is no end...

I am not one of those who bemoans this fact. I am convinced that new formats, contributors, can always contribute to this well-ploughed genre by making original contributions.

It seems that  William Varner, Professor of Bible and Greek at the Master's College, has made an original and stimulating contribution of his own in the new Evangelical Exegetical Commentary Series for Logos with his commentary on James. In fact, the endorsements for his work represent a veritable "who's who" in Jacobean scholarship and beyond. Check these impressive blurbs:

"Will Varner has provided a highly valuable and well-needed contribution to the exposition of the book of James in his new commentary on James for the Evangelical Exegetical Commentary series. His reasoning is clear, cogent and very welcome to the church's great heritage in this precious epistle."

“Varner's commentary is so complete one can get by with this commentary alone! It sketches the significance of the man James, sketches the exegetical options, sorts out primary evidence, examines each text in light of larger themes in biblical theology, draws even-handed and compelling conclusions, and so puts on the plate all we need to read, interpret, and live the message of James.”

"In this installment of a first-ever detailed exegetical commentary written first for digital publication, William Varner sets a high standard with his comments on James under numerous headings. After a thorough introduction highlighting the importance of James, the half-brother of Jesus, as the leader of the early Christian church in Jerusalem, the commentary expounds short sections of text with introductions, translations, textual-critical notes, biblical theology, devotional insights and potential sermon points often nicely alliterated, all sandwiched around detailed clause-by-clause explanation of the text. Particularly helpful are the grammatical categorizations, fully conversant with verbal aspect theory and discourse analysis, and the voluminous knowledge of and interaction with other scholars. Time and again Varner helps the reader sift through complex exegetical conundra clearly, always coming to plausible and usually to persuasive conclusions. A must for any serious scholar, preacher or teacher of this often neglected epistle!"

“Will Varner's James is marked by all the characteristics that make for an excellent commentary on Scripture: careful attention to the text, wide-ranging research, comparison with other ancient texts, and concern for theological and practical application.”

“While the homily we know as James has not been neglected in recent NT scholarship, there is always room for another detailed interaction with this document written to Jewish Christians, not least because it may well be the earliest NT document we have.  William Varner presents us with an up-to-date, detailed, helpful analysis of James which interacts with a wide range of scholarship, ancient and current, and gives us a new reason to affirm once again that Luther, and James' other cultured detractors, were wrong to neglect, parody, or pit James over against Paul.”

“I’m no Jacobean expert, but Varner has produced a fine commentary, with a very readable introduction and sober comments throughout. He seems very much on board with Hengel and Bauckham in attributing a significant role to James in the early church. Each section has an introduction, outline, original text, textual notes, ESV translation, commentary, biblical theology comments, and a devotional/application section. A fine commentary to add to your Logos collection!”
Dr. Michael Bird
Lecturer in Theology and New Testament
Crossway College
Brisbane, Australia

Recently, I was privileged to ask Dr. Varner a few questions on his James commentary.

1.      Talk about what attracted you to the opportunity of writing a commentary on James for the new Logos series the Evangelical Exegetical Commentary (EEC) series?
I had finished my discourse commentary on James and felt like I would like to delve even further into the text of James. I liked the proposed format of the EEC commentaries, and when I heard that they had not yet contracted for James, I threw my hat in the ring.

2.      What was your process in writing this commentary?

I had amassed a lot of articles from my first commentary so I started by reviewing them. I then took a fresh look at the intricate details of the Greek text in James and engaged in some more detailed lexical studies of individual words, especially how they were used in extra Biblical Greek literature like Philo, the Testaments of the Twelve Patriarchs, and the Greek ethicist, Epictetus. I then explored some larger Biblical theological issues in each passage. I then further developed some homiletical suggestions for preaching each pericope.

3.      You have published a commentary on James before, The Book of James: A New Perspective (Kress). How did this commentary prepare you to write a much larger commentary for the EEC?
It was the best preparation I could ever do. The earlier commentary was based on the principles of discourse analysis and focused on a top-down analysis that resulted in examining the macro-theme/s of James. With that in hand, my work on this commentary focused on a bottom-up analysis, and to my great delight the results confirmed the “big picture” that I discovered earlier.

4.      Following up from the previous question, what does a “new perspective” on James look like, and what are the implications for the church?
I use that expression “new perspective,” not out of a desire to copy the New Perspective on Paul, but to alert readers to the importance of looking afresh at this book and its author. By a new perspective on James the man, I mean to convey my argument that the uterine brother of Jesus was not only the head of the Jerusalem believing community, but that he was the human head of the entire Jesus movement from the early 40’s to his death in 62 AD. I think that this recognition has implications for seeing Paul in a more historically accurate role – the one who called himself the “least of the apostles” and an apostle who acknowledged James’s leadership role described above. A new perspective on the James the letter revolves around my discovering what I believe is the “peak” of the letter that opens up a fresh understanding of its overall theme and structure. I do believe that I am suggesting a new way of looking at James and his letter that will free the church from a wrong idea that Paul is the uncrowned Pope of the Protestant faith.