Functional or Official?: "Bishops and Deacons" in Philippians 1.1

In my last post I had this brief comment regarding the unusual appearance of ἐπισκόποις καὶ διακόνοις ("bishops and deacons")in Phil 1.1:

The only occurrence of ἐπίσκοπος in the undisputed Paulines (cf. 1 Tim 3.2; Tit 1.7). Probably the term refers to a function rather than an official position.

In a moment, I will nuance my original statement above. But first, let's look at the noun ἐπίσκοπος. Originally, I translated the last part of 1.1 "...with the bishops and deacons." Maybe the translation of ἐπίσκοπος as "bishop" is a bit misleading here (see NRSV). Perhaps a better rendering for ἐπίσκοπος would be "overseer" is a bit more accurate (see NIV, NAS). Towner, in referring to 1 Timothy 3.2, states the problem well:

It seems preferable to avoid the translation 'bishop' since this term carries so much later ecclesiastical baggage with it (Towner; 244).

This point, however, is not to deny that ἐπίσκοπος was a distinguishable position within the community. One needs to look no further than the distinguishing preposition σύν ("with"). In other words, they ("overseers and servants") are singled out from the rest of the community as they are distinguished from "those who are in Philippi." This demarcation

would be pointless if the position were not a recognized one in the Philippian community. Therefore my opinion on this verse should have read "Probably the term emphasizes the function rather than the title of recognized members of the community." Or as Fee states: While one need not doubt the titular implications of this usage, the accent is on function (Fee; 68).

The question remains, however, why does Paul single these two groups out? Is it to prepare the way for the rebukes and criticisms that occur in the body of the letter? (Silva; 41; O'Brien 49-50). Fee points the way to Phil 4.2-3, "where Euodia and Syntyche, who are most likely to be reckoned among these leaders, apparently are not in full accord with each other" (Fee; 69).

Whether one agrees with Fee's assessment or not, it seems safe to suggest that Paul has included the leaders in his salutation to remind the community of their place in Christ.

I have been memorizing Philippians in Greek--although my pace has come to almost a stand-still.

I thought in order to encourage some progress in this area, I would offer up my own translating work as it happens. Well, look no further than right here:

Paul's Salutation to the Philippians (1:-2)

1 Paul and Timothy, slaves of Christ Jesus, to all the saints (lit. 'holy ones') in Christ Jesus who are in Philippi, with the bishops and deacons:

2 Grace to you and peace from God our Father and the Lord Jesus Christ. 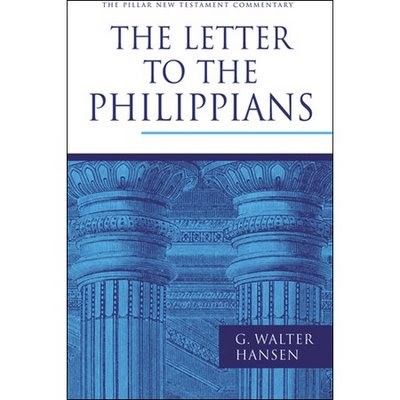 With wisdom and clarity, Hansen offers a concise exegetical commentary on the Letter to the Phillippians. He introduces the historical setting as well as the nature and occasion of the epistle before exploring it in light of partnership---the social and corporate dimensions of community---in the progress of the gospel.

In the two latest editions of JSNT (Journal for the Study of the New Testament) 31.3 and 31.4, there are two articles that I have read thus far that are worth reading.

The first, (31.3)Roy Ciampa's 'Revisting the Euphemism in 1 Corinthians 7.1' is the most comprehensive study on the background of the verb ἅπτω ('to touch')to date. Ciampa investigates no less than 25 examples of this verb along with other verbs that are translated as 'to touch' and comes to the conclusion that although the euphemism does relay the idea of sexual intercourse, there is a distinct usage of these verbs that imply more than that, namely, a man using a woman or a boy for sexual gratification. Therefore Paul is not rejecting sex in general but is critiquing the perversion of sexual relations that some Corinthians are practicing.

I imagine this is a bit project in the larger scale commentary Ciampa is co-authoring with Brian Rosner on 1 Corinthians for the Pillar series. If this is any indication of the larger work, we can look forward to a commentary that will actually contribute something new and fresh to Corinthian studies.

In the next volume (31.4), fellow blogger and Revelation extraordinaire, Alan Bandy of Café Apocalypsis fame, writes a very instructive article "The Layers of the Apocalypse". Alan notes that many have attempted in vain to unpack the structure of Revelation with no consensus even close to emerging. Instead, he offers up some possible solutions that include a tripartite framework that includes a surface layer, an intertextual layer, and an intratextual layer. These three layers help to contribute to a better understanding of the Apocalypse's structure and may point the way to further work in this direction.

Incidentally, Alan will be co-authoring a volume on Revelation in the Biblical Theology of the New Testament series (Zondervan Academic) with Andreas Köstenberger.
Posted by Matthew D. Montonini at 12:10 AM 0 comments

FYI: Sage Journals is offering their free trial until the end of April. Be sure to check it out!
Posted by Matthew D. Montonini at 12:15 AM 3 comments