In a week in which I consider to be an embarrassment of riches, a few more have come to my attention in the form of four audio lectures from the great C.F.D. Moule.
These lectures, delivered at Asbury Seminary as part of their Heritage series, took place in March of 1974 and are entitled: "Whither Christology..." Here are the links to those lectures:


Moule, who spent some twenty-six years as the Lady Margaret's Professor of Divinity at the University of Cambridge (1951-1976), was a true giant in British New Testament Scholarship, rivalled only by Dodd, Barrett, and Caird in the 20th century. Despite his profound learning, (it was said he had the entirety of the Greek New Testament memorized!) Moule was known for his great humility, once prompting friend and fellow legendary NT scholar, Joachim Jeremias to remark, "In him could be seen no trace of original sin." One will get a sense in listening to these lectures, both sides of this great man. Enjoy!

Update: I have discovered one more audio lecture of Moule's. This one took place on November 1, 1983 at Seattle Pacific University for a chapel service. The title of the lecture was "Reconciliation: Metaphor and Reality" . You will need to download iTunes for this one. Enjoy! 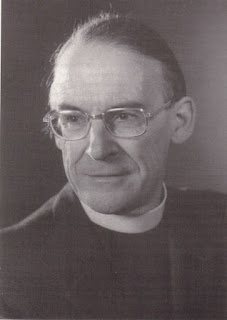 One can definitely see why this essay was so formative for Caird' s student, N.T. Wright in his own work, Jesus and the Victory of God. It is one more indication that in biblical scholarship, we all stand on the shoulders of giants.
Posted by Matthew D. Montonini at 1:52 PM 0 comments

Once again, this page (right sidebar) will be updated with titles, etc., as time allots.

The videos from these can be viewed below:

“From Patmos to Laodicea: The Crisis of the Ordinary in Revelation 1-3”


“The Beast and Babylon: The Political and Economic World of Revelation 13-18”

Through a happy confluence of events, sparked by my blogpost the other day regarding Mansfield College, John Marsh, and George B. Caird, Mark Goodacre and I have been graciously given audio files of George B. Caird lecturing on New Testament Theology, by a former student and an outstanding New Testament scholar in his own right, Jeffrey B. Gibson.

In personal correspondence, Jeffrey mentioned to me that he was a student of Caird's at Oxford from 1979 until Easter of 1984 when Caird passed away. These recordings take place between 1979-82. Gibson also informed me that much of what can be found on these sixty-plus audio recordings was incorporated by another Caird student, Lincoln D. Hurst, into Caird's NT Theology, for which the latter had left roughly two-thirds of a complete manuscript at the time of his passing. According to Gibson, outside of  another former student, John Muddiman, no one knew Caird better than Hurst, so it was fitting that he would be entrusted to see it to completion.

Gibson was also kind enough to provide a picture of Caird, of which I have never seen until yesterday.

Update: Jeffrey has given Mark Goodacre and I the blessing to share these audio files of Caird's lectures, which can be conveniently found at a  page I have created that can be accessed on this blog (right sidebar) or simply click here.

Posted by Matthew D. Montonini at 7:52 AM 0 comments

George B. Caird, a famous New Testament scholar, is shown lecturing at Mansfield College, Oxford, where he served under Principal, John Marsh, from 1959-69, before taking over the principalship in 1970-77.

This clip, starting around the ten minute mark, shows Caird lecturing on Jesus' high priesthood in Hebrews and is not quite two minutes long. Caird can also be seen around the thirty minute mark eating dinner with other faculty, including Marsh, who sits at the head of the table with Caird sitting to his immediate right hand side. Following from there, between approx. the thirty-one minute mark and 33:18, Caird and Marsh seem to be discussing the former's succession of the latter's principalship of Mansfield College.

Caird is best known for his works Jesus and the Jewish Nation, New Testament Theology, The Language and Imagery of the Bible, and Principalities and Powers. In addition, Caird served as a doktorvater to New Testament luminaries such as L.D. Hurst and N.T. Wright.
Posted by Matthew D. Montonini at 7:59 PM 0 comments

I am very excited to hear the news that the John, Jesus, and History section of SBL in partnership with Saint Mary's Seminary and University is holding a pre-SBL conference Nov 20-22, celebrating the legacies of two of the greatest Johannine scholars of the 20th century, C.H. Dodd and Raymond E. Brown.

Dodd's groundbreaking, The Interpretation of the Fourth Gospel and his Historical Tradition in the Fourth Gospel, are celebrating their 60th and 50th anniversaries, respectively, and will be celebrated in a collection of essays published by Cambridge University Press and co-edited by Tom Thatcher and Catrin Williams, entitled, Engaging with Dodd on the Gospel of John.

Many of you know that Raymond Brown is perhaps my single favorite NT scholar of all time, so I am excited that he is going to be celebrated at an institution in which he used to teach. His two-volume commentary on the Gospel of John is still among the top commentaries ever penned and his The Community of the Beloved Disciple has and continues to be very influential in Johannine scholarship. I hope to attend this. Here is the flyer below:

Posted by Matthew D. Montonini at 1:19 AM 0 comments