I have repeatedly expressed my admiration for two of the preeminent New Testament scholars of the second half of the twentieth century in Raymond E. Brown and Charles Kingsley Barrett. Their immense contributions to scholarship continue and will continue to influence scholars in the years to come. That being said, it is a bit curious to me as to why there has yet to be a definitive biography written of either man.

With the recent spate of biographies written on George Eldon Ladd, George Beasley-Murray, F.F. Bruce, Rudolf Bultmann, and older ones such as the one written on C.H. Dodd, I believe it is high time that Brown and Barrett join these other luminaries and have their stories told.

In the case of Raymond Brown, the lack of a definitive biography is extremely curious. Brown passed away fifteen years ago this August, so this task is long overdue. Marion Soards, a former student of Brown's, has written an excellent bibliographic entry on him for the Dictionary of Major Biblical Interpreters, but by virtue of the dictionaries objectives and space, the entry is more of a outline of Brown's career and contributions. The same can be said of Barrett, who has his entry penned by former student, John Painter. It too, is an excellent entry, but is far from a full-scale treatment that the great man deserves. In the case of Barrett, however, his passing has been much more recent, as it will have only be two years this August since his passing.


Perhaps there is something in the works that I am as of yet unaware, and two recent developments may be pointing in this direction. On May 13th, Barrett had a day in his honor, "C.K. Barrett Academic Day" at Durham University where he served as Professor of Divinity for some twenty-four years. During this event, both Robert Morgan and John Ashton reflected on Barrett's legacy, with Morgan focusing on his contribution to New Testament Theology, and Ashton on Barrett's place among Johannine commentators.

Brown's legacy will be honored just before the SBL annual conference (Nov 20-22), at St. Mary's Seminary and University in conjunction with the John, Jesus, and History section of SBL, where he served as a professor for thirteen years before leaving for Union Theological Seminary. I blogged on this before and the program can be found here.

So, the question remains: "Will both Barrett and Brown get a biography written about them?"; and a related question, "Who will write it?" Robert Morgan, Marion Soards, Ben Witherington, John Painter, might all be viable candidates. Or perhaps, could this be someone's dissertation topic?

It is imperative that we remember these men and learn for the great example of scholarship and their exemplary service for the church. In the words of the twelfth-century theologian and author, John of Salisbury in his Metalogicon:


"We are like dwarfs sitting on the shoulders of giants. We see more, and things that are more distant, than they did, not because our sight is superior or because we are taller than they, but because they raise us up, and by their great stature add to ours."

One of the greatest NT scholars of the latter-half of the twentieth century, Dr. Leon Lamb Morris (1914-2006), has twelve audio lectures available from sermonaudio.com. All of these are on John's Gospel, for which Morris wrote his classic commentary in the NICNT series in 1971 and updated in 1995, which was eventually replaced in 2010 by Ramsey Michaels' contribution.

To get an idea of just how prolific Morris was, see his bibliography here.

Enjoy!
Posted by Matthew D. Montonini at 10:51 AM 0 comments

Some five months ago, I posted a series of videos of lectures David deSilva delivered on the 4th Annual EO Celebration Cruise last year. In the comments section, deSilva noted that Hendrickson Publishers were going to publish a revised form of these lectures and that it would be out in time for SBL in November.

After scouring the Hendrickson website, in which case I could find nothing, I have found this info elsewhere:

In my opinion, deSilva along with Craig Koester, are the two leading experts on John's Apocalypse, so this volume will definitely be worth purchasing.

Fourth Gospel Introductions Getting a Makeover

Gary Burge's Interpreting the Gospel of John, originally published 21 years ago (1992) is coming out with a second edition. Here is the description:

This tried and true classroom favorite by respected New Testament scholar Gary Burge has been praised for its usefulness. The expanded second edition has been revised throughout to take account of current scholarship and introduces software tools that have become available since the original edition was published. Combining original insight with how-to guidance, this up-to-date introduction to the Gospel of John helps students interpret the text and apply it in teaching and preaching. 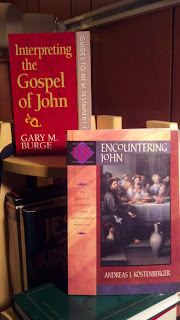 In addition, Andreas Köstenberger's Encountering John: The Gospel in Historical, Literary, and Theological Perspective, is receiving a second edition some 14 years after its initial publication (1999).

In this updated edition of his successful textbook, leading evangelical New Testament scholar Andreas Köstenberger offers a guide to John's gospel that is informed by current scholarship but written at an accessible level. The book has been revised throughout and features a new interior design. Photos, sidebars, and other pedagogical aids are included.


They will both be due out in November, in time for SBL, and I would recommend both, although I might give a slight edge to Köstenberger's Encountering John in terms of thoroughness, and from a visual standpoint. But anyone who is a student of the Fourth Gospel would do well to get both.

With the recent passing of legendary Dead Sea Scrolls and Historical Jesus scholar, Géza Vermes (1924-2013), I was delighted to find this short video interview by John Dickson entitled "The Christ Files: An Interview with Géza Vermes".

George Caird Video Clip from "Who was Jesus?"


A few weeks ago, I discovered a video on Mansfield College which documented the transition of the Principalship from John Marsh to George B. Caird. This of course, led through a wonderful confluence of events, the donation of sixty plus audio files from Jeffrey Gibson, a New Testament scholar and former student of George Caird's.

The maker of the intial film, Peter Armstrong, who was a student at Mansfield College at the time, went on to become a producer at the BBC, where he served for 25 decorated years. One of the documentaries that Armstrong co-produced along with Don Cupitt, was the 1977 documentary, Who was Jesus? Mark Goodacre alerted me to its existence, but sadly, there were no clips anywhere online. I reached out to Peter Armstrong, and he has graciously uploaded a video clip from the documentary which features a Q&A with George Caird! I am not sure if Armstrong will upload more clips, but I am hopeful, as he has designated this as 'Part 1'.

Without further ado, here is the video (incidentally, there is a short clip of David Flusser on here as well, and some unfortunate handling of a DSS fragment by a preservationist!)

I was reading a bit of C.H. Dodd's classic, The Interpretation of the Fourth Gospel, and came across this great, albeit lengthy quote regarding the Johannine prologue (John 1.1-18):


In the case of the Prologue, I suggest that the true solution of the problem may be found if we take with the fullest seriousness the implications of the proposition, ὁ λόγος σὰρξ ἐγένετο, in the light of the whole story that follows. The Logos did not merely descend upon Jesus, enter into Him, or abide in Him. The Logos became the σάρξ or human nature which He bore. The life of Jesus therefore is the history of the Logos, as incarnate, and this must be, upon the stage of limited time, the same thing as the history of the Logos in perpetual relations with man and the world. Thus not only verses 11-13, but the whole passage from verse 4, is at once an account of the relations of the Logos with the world, and an account of the ministry of Jesus Christ, which in every essential particular reproduces those relations. 'The light shines in darkness'—that is a description of the created universe, in which pure reality is set over against the darkness of not-being: it is also a description of the appearance of Jesus on earth, as this evangelist sees it, and as he describes it in detail in the whole of his gospel. 'The darkness did not overcome it'—the world, in spite of the presence of non-divine elements in it, does not relapse into not-being, because light is stronger than darkness, reality and the good than unreality and evil. Similarly, the opposition to Jesus, even when it seemed to triumph in the crucifixion, failed to conquer Him. 'The real light that enlightens every man who enters the world' is to be seen in the universal mission of Christ, to draw all men to Himself, to gather together the scattered children of God. For that purpose He was in the world, but unrecognized by the world. As the Logos comes to men, who, as λογικοί (unlike irrational creatures, ἄλογα), are its proper home, but is not truly 'received' by them, so Jesus came to the Jewish people, His own people, and found no response. As those who admit the divine Logos, or Wisdom, to their souls, become sons of God, so Jesus gave to His to His disciples 'words of eternal life', and they were born again (283-84).

Well, it looks that the SBL wish list just got a tad
longer as I have learned that Andrew T. Lincoln, Portland Professor of New Testament at the University of Gloucestershire,  has a forthcoming volume on the way provocatively entitled, Born of a Virgin? Reconceiving Jesus in the Bible, Tradition, and Theology (Eerdmans; November 2013; 384 pp.).

Here is a description:


This book will appeal to those many Christians who struggle with the concept of the virgin birth. Andrew Lincoln's Born of a Virgin? begins by discussing why the virgin birth is such a difficult and divisive topic for Christians. The book then deals with a whole range of literary, historical, and hermeneutical issues from a perspective that takes seriously creedal confessions and theological concerns. As part of his exegetical investigation of the New Testament texts, Lincoln considers the literary genre and distinctive characteristics of the birth narratives as ancient biography. Further, he delineates how changes in our views of history and biology decisively affect any traditional understanding of the significance of an actual virgin birth, and he explores what that means for the authority of Scripture and creed, along with implications for Christology and for preaching and teaching from the birth narratives.


Lincoln has already written two excellent books on John's Gospel, one a commentary for the Black series, and the stimulating monograph, Truth on Trial: The Lawsuit Motif in the Fourth Gospel, so I am eager to see the latest offering from one of the finest NT scholars in the world today. Incidentally, for those who have access to the Journal for the Study of the New Testament, Lincoln has published an article entitled, " Contested paternity and contested readings: Jesus’ conception in Matthew 1.18-25" JSNT 34 (2012) 211 – 231; and has another on the way in the Journal of Biblical Literature entitled, "Luke and Jesus' Conception: A Case of Double Paternity?" JBL (forthcoming 2013). These two articles may give one a sneak preview of  Lincoln's thesis before the book arrives.
Posted by Matthew D. Montonini at 2:06 PM 0 comments

I have begun to leave cursory descriptions of the audio files for the George B. Caird page. These descriptions are not exacting, and will no doubt need refinement, but at least it is a start. Once again, I will continue to update these files as time permits. 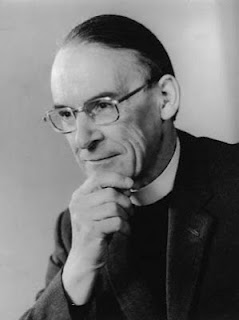