As I was reading the narrative of 2 Kings 4 this morning, the account of Elisha's raising of the Shunammite woman's son (2 Kings 4:18-37) called to my mind some of the disparate healing accounts in Mark's Gospel. 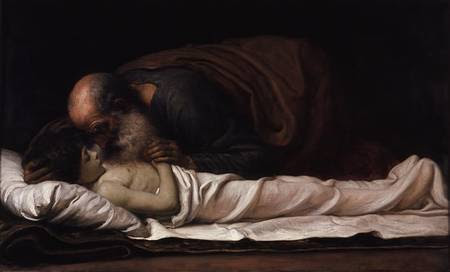 Earlier in the narrative Elisha prophesies that the Shunammite woman, despite her husband's advanced age will conceive a son in the next year (2 Kings 4:14-17). The account fast-forwards a bit, as now the child is grown and is helping his father in the field when he complains of his head hurting. The father orders one of the servants to carry the boy to his mother (4:18-20). The child later dies on his mother's lap, and she proceeds to lay her son on the bed that Elisha would lay on when he would stay with this family (4:21; cf. 4:10). Next, the woman along with a servant, takes a donkey to seek out Elisha who is at Mount Carmel (4:22-25).

Elisha sees her coming and sends out his servant Gehazi to ask her if all is well (4:26). She responds that all is well and proceeds to the mountain where Elisha is present (4:27). She grabs his feet and Gehazi attempts to push her away (4:27). Elisha stops Gehazi and admits that he does not know yet why she has come to him (4:27). She then asks Elisha rhetorically, "Did I ask my lord for a son? Did I not say, 'Do not deceive me?'" (4:28). Elisha proceeds to send Gehazi back with her to her home where he is instructed to lay Elisha's staff on the boy's face (4:29). The woman is not satisfied with this healing via distance and refuses to leave unless Elisha comes with them (4:30). Gehazi does as he is told and the healing is unsuccessful (4:31). Enter Elisha. He shuts the door behind them and prays (4:33). Next, he lays on the child, puts his mouth on the boy's mouth, his eyes on the boy's eyes and his hands on his hands, stretching himself upon the child's body. Soon the body becomes warm (4:34). After walking back and forth in the house, Elisha repeats the action (4:35). The child sneezes seven times and opens his eyes (4:35). Next, he orders Gehazi to call the woman and orders her to pick up her son (4:36). She falls at Elisha's feet, picks up her son and leaves (4:37).

After reading this narrative in 2 Kings, I could not help but reminded of Mark 5, the healing of Jairus' daughter, and the healing of the hemorrhaging woman (5:21-43). Here are some of the points of correspondence:

2. The intervening narrative of the hemorrhaging woman (5:25-34), stalls the narrative of what becomes of Jairus' daughter until v.35, where we find that Jairus' daughter has died in the interim. Jesus takes his disciples Peter, James, and John to Jairus' house. When he arrives at the house Jesus pronounces the daughter as 'asleep' which draws the jeers of the mourners present (5:38-40). Jesus proceeds these mourners out taking his disciples, and the parents of the little girl in to where she is laying (5:40).  Jesus then orders the girl to arise (5:41), and she immediately stands up and begins to walk around to everyone's astonishment (5:42). Similarly, Elisha is accompanied by his disciple, Gehazi to the house of the Shunnamite woman, where her son is lying on the bed when he is eventually raised back to life (2 Kings 4:31-35).

3. Another healing episode found in Mark's Gospel that finds points of correspondence with this narrative in 2 Kings 4 is the healing of the boy with the unclean spirit in 9:14-28. Once again, a young child is involved, this time, a boy who has what appears to be seizures. One particular aspect is noteworthy here. You may recall Gehazi's failed attempt at healing the boy in 2 Kings 4:31. Jesus' disciples also fail in healing (Mark 9:18) which leaves Jesus angry at their inability to do so (9:19). Jesus, like Elisha, succeeds at the healing after the disciple(s) failed attempt (9:25-26).

To wrap up this post, I am in no way suggesting literary dependence here. These are just some interesting (to me at least!) observations on points of correspondence between the two accounts. So what do you think?