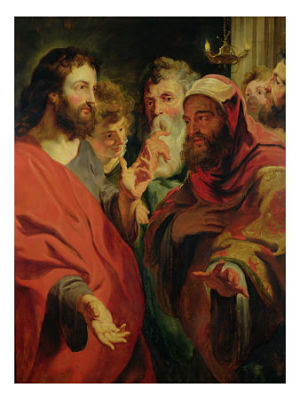 For the previous two posts in this series, click here.

On the last post, we highlighted how Nicodemus, via his titles for Jesus ('Rabbi', 'teacher') and his language of 'knowing', demonstrated, ironically, just the opposite. If Nicodemus, a Pharisee, knows anything in his opening salvo to Jesus, his language betrays only a partial understanding at best (3:2).

Jesus' reply and the subsequent dialogue will be highlighted in the remainder of these posts (3:3-15). (I will save John 3:16 ff for another time.) Jesus responds to Nicodemus' statement with a statement of his own. "Very truly I tell you no one can enter the kingdom of God unless they are born of water and the Spirit" (3:3). What is translated, 'Very truly' (ἀμὴν ἀμὴν) is known as the double-Amen formula, unique to John's Jesus and seen previously in Jesus' response to Nathanael in 1:51. Another connection back to the Nathanael episode, is the fact, that both the former (Nathanael; 1:49) and the latter (Nicodemus; 3:2) both refer to Jesus as 'Rabbi,' demonstrating their insufficient knowledge of his identity. Thus far in John's narrative the 'kingdom of God' (τὴν βασιλείαν τοῦ θεοῦ), has yet to appear, and Jesus' reference to being "born again/above" should recall to the reader/hearer the language of "the children of God" in 1:12,13. Those who do become "children of God" do so because they have "believed in his name" (1:12), in direct contrast to those who operate in darkness (1:5, 10-11). Once again, the metaphorical language Jesus is using here mirrors the dialogue Jesus has with 'the Jews' after the temple-clearing incident in 2:18-21. There 'the Jews' after asking for 'a sign' (σημεῖον) understand Jesus' metaphorical language at the literal level (2:20). Deepening the connection between these two dialogues is evinced by Nicodemus mention of 'signs'(τὰ σημεῖα), as a descriptor of who he believes Jesus to be. A seen in 2:18, 23-25, signs are insufficient in of themselves for knowing Jesus. If the reader/hearer keeps these details in mind, one can anticipate Nicodemus' response will be one of misunderstanding to Jesus' statement in 3:3.

In 3:4, Nicodemus, a Pharisee, like "the Jews" before him (2:20) take Jesus' statement literally, again, revealing ignorance. Jesus' response continues, veiled in metaphorical language (vv.5-8). One can almost hear the exasperation in Nicodemus' voice as he asks, "How can this be?"(3:9). Jesus' response is biting (vv.10-15). First, he calls, Nicodemus "Israel's teacher" (ὁ διδάσκαλος τοῦ Ἰσραὴλ). One should notice the irony here. Jesus, the one who has complete knowledge of all things, simultaneously rejects Nicodemus' insufficient title of 'Rabbi' and 'teacher' in 3:2, while affirming he knows Nicodemus' character, much like he knows Nathanael's in 1:47. Next, "...and you do not understand (οὐ γινώσκεις) these things?" recalls themes in the prologue 1:5,10, and recalls those who do not recognize Jesus' identity in 1:26; 2:9. Jesus goes on to say, "we speak of what we know (οἴδαμεν; 1:18,26,48;2:9,24) and we testify (1:7-8,15,32; 2:25) to what we have seen (ἑωράκαμεν; 1:18, 32-34,36,39,48.48b,50-51;2:23) but still you do not accept our testimony" (1:11,15,32-34;2:25). Once more, Jesus asserts his knowledge (3:11) over Nicodemus' perceived knowledge (3:2). Jesus highlights Nicodemus' imperception by using the famed Jewish form of argumentation, qal wahomer (lesser-to-greater), arguing that if Nicodemus doesn't understand Jesus' earthly argument he will not understand his heavenly one (3:12). In verse 13, Jesus proceeds to state that no has ever entered heaven "except the one who came from heaven- the Son of Man", similar to statements found in the prologue (1:14) and in Jesus quotation of Gen 28:12 in John 1:51, with particular reference to Jesus' preferred designation, 'Son of Man.'

Finally to conclude this post Jesus quotes Numbers 21:8,9 by recalling Moses' 'lifting up' of the snake in the wilderness, will be akin to Jesus ('Son of Man'; 1:51; 3:13) being 'lifted up' (ὑψωθῆναι) so that "everyone who believes in him (πιστεύων ἐν αὐτῷ; cf. 1:12-13) may have eternal life" (3:15). This 'lifting up' means both exaltation and a reference to the physical lifting up on the cross.

Conclusions: Jesus exposes Nicodemus' presumed knowledge of him to be insufficient at best. He rejects his inadequate titles ('Rabbi', teacher') in favor of his own ('Son of Man'), while demonstrating his complete knowledge of Nicodemus' character ('teacher of Israel). Nicodemus links Jesus' performance of 'signs' as to his identity as 'sent from God' (3:2). Jesus is 'sent from God' (1:1b) and as the one who makes God known (1:18) is still rejected by Nicodemus and those like him (1:10,11). It is telling that as the Light, (1:4-5; 9) Nicodemus approaches him under the veil of darkness (3:2), exemplifying those who do not recognize Jesus (1:10c) and those who reject him (1:11).

Thank you for the insight and elucidation. I found it to be enlightening. I myself find John 3:1-3 intriguing and highly significant. You can learn to appreciate Scripture all the more when you're a student of theology. Thank you, once again.