Interview with Craig Keener on Acts: An Exegetical Commentary, Vol.1; Part I 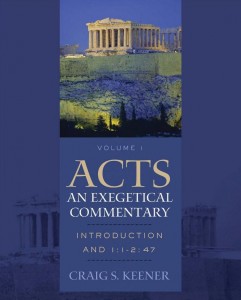 Many years ago, when I began reading scholarly works for the first time, Craig Keener was one of the handful of scholars who was on my reading list. I remember reading through his Paul, Women,& Wives and his well-known, The IVP Bible Background Commentary: New Testament and being profoundly influenced by his use of both ancient Jewish and Greco-Roman literature to help illumine the writings of the New Testament.

We began a friendship several years ago, keeping in touch via email and the occasional phone call. Craig was there for me during a pivotal time in my personal life, and our friendship was cemented at that point. My first SBL (2007), provided me the first opportunity to meet Craig in person, as he took me out to lunch. When I was considering going to Asbury for a PhD, Craig was one of my biggest supporters. I sat in on his PhD level class on Revelation and met with him afterwards to discuss my future plans.

So, it is a great honor and privilege for me to have the opportunity to ask him some questions concerning his magnum opus, a multi-volume commentary on Acts, that when complete, will be comprised of more than 4,000 pages! This is part one of our two-part interview. Thanks to the fine folks at Baker Academic, particularly, Trinity Graeser, who sent me a copy of volume one of this majestic commentary.


1. You are no stranger to writing commentaries and large ones in particular. Could you describe your process in writing a commentary, specifically, your multi-volume effort on Acts?

﻿
I started writing the Acts commentary in the year 2000, and by then I had about twenty years of research behind it (though for the first couple years of research I probably didn’t know what I was doing). Those two decades included research specifically on Acts, but also my working through a range of ancient sources the information from which was valuable for many of the commentaries and other projects I do. For me, researching through ancient sources is exhilarating—it’s fun! Sitting down and turning that into a commentary is quite a bit more tedious and required much concentration. For me, the advantage of writing commentaries over writing other books is that I don’t have to work as hard to organize material—the biblical text provides the outline, so I can follow that for the big structure. I was ADHD as a kid (though back then they were just calling it “hyperactive”), which may be why I love research but why some tasks (such as working through editors’ comments) seem so tedious. If I could type as fast as I think maybe writing would be easier, but researching through ancient sources is a great joy.

2. One of the key aspects of your commentaries is your vast knowledge of Greco-Roman literature. Talk about the notecards that you have compiled over the years that have enhanced this endeavor.

I loved Greek and Roman sources even as a child. I couldn’t get anyone to teach me Greek or Latin that early, but in translation I devoured Homer and Tacitus at age 12, Plato and Virgil at 13, Greek dramatists and parts of Thucydides at 14. Looking back, I can understand why a lot of kids wouldn’t play with me—I was really strange! After my conversion to Christianity I set Greek and Roman sources aside and began devouring the Bible, the one book from the ancient world that I had deliberately avoided before. College introduced me to early Jewish sources, but it wasn’t until the beginning of graduate work that I began to see the value again in the Greek and Roman sources. Since the time that I was a college sophomore I have been collecting information relevant to understanding biblical passages (initially secondary sources and materials on ancient Judaism, and a couple years later branching out into all of ancient Mediterranean literature). For the first two decades or so I collected this information on index cards, before I started taking notes on a computer instead. I had maybe 100,000 index cards before I stopped collecting data on index cards; the difficulty was that the same card might have information for multiple passages, so I had to file it under the first passage and write my commentary on that book before I could file it forward to a passage in another book! (Once Acts is fully done, I’ll be able to move into Paul!) I took notes as I read through ancient literature and just filed them wherever relevant. Early in that process I began to discover which features of ancient sources proved most relevant to which books; ancient Jewish sages, for example, shed particular light on Jesus’s teachings, and especially in Matthew; Greek philosophers had more parallels in Paul; apocalyptic sources—well, you can guess! Over the years, though, I collected the largest amount of material for Acts.

3. Your approach in this commentary is a sociorhetorical one. Discuss why you chose this approach.

I can offer the greatest distinctive contribution with insights from the Greco-Roman context of Acts; there’s no sense in expecting everyone to devote decades to studying the sources, but I can contribute my own years of research here, and I loved doing it. Because Acts is a text, however, the literary dimensions of Acts are paramount. These two approaches (literary and based on the ancient setting) are best addressed as complementary rather than as in competition. Luke addressed Acts to an audience that would hear the text, perhaps over and over, within a shared sphere of cultural information they took for granted. For example, Luke could take granted that at least the heart of his target audience would recognize many of his biblical quotations and allusions. Moreover, just as they understood the Greek language, they would recognize many of the places he mentioned. They would be familiar with some cultural information that he would not have to stop and explain for them (but with which modern readers are often unfamiliar). A sociorhetorical approach (or whatever title we choose to use for the blending of approaches) takes seriously both the cultural and literary dimensions of the text. It thus helps us better hear what Luke expected his first target audience to hear.

My focus is on showing that Acts is historiography, but if you read the ancient historians whose works have survived, you also see differences between Luke and some of the elite historians. Elite historians made fuller use of rhetoric to shape their history-writing, for example developing long speeches or sometimes highlighting tragic elements. They also often recorded larger-scale events for which annals were sometimes available. Sometimes they confronted conflicting reports in their sources and thus summarized the different sources by name. By contrast, some people recounted recent events on a more popular level, using storytelling skills. Mark appears more like a master oral storyteller (I am referring to the character of his style, not his truth content). Luke is the most rhetorically advanced of the Gospels, but he is not writing anything on the level of the multivolume histories produced by and for the elite. (His work is closer to single-volume historical monographs, but even in those cases, Luke is not writing as a member of the elite.) Luke tells a wonderful story in a way that would be more respected by ancient intellectuals than was Mark, but it lacks some of the features of “elite” historiography I have cited above.

5. How favorably does Luke compare to other ancient historians in terms of accuracy?

I argue for Acts as an excellent source for the history of the early Christian movement. In the commentary, I focus less extensively on the “popular” character of the historiography (your question above) than on its character as historiography. With the majority of scholars, I do view Acts as a work of historiography. In the introduction, I also want to explore what that means. Ancient historians often wanted to make moral, political or theological points with their narratives, and often they tell us as much. At the same time, they used the historical genre rather than another one because they wanted to draw on information that they believed to be factual. Not simply composing annals, they shaped their material to gain a good hearing, but they were shaping information rather than freely composing as novelists usually did. One can see this dependence on information by comparing, for example, where narratives of Plutarch, Suetonius and Tacitus overlap in their content; substantial overlap shows that biographers and historians were committed to using authentic material. Where we can compare Luke with Mark and Matthew (in Luke’s first volume, his Gospel), we see what we see in other ancient historians: he is shaping information, not fabricating it. We don’t have all Luke’s sources (neither written nor, certainly, oral), but we have enough to see that he is true to the method he lays out in his preface (Luke 1:1-4). He’s writing ancient historiography, not an ancient novel. Further, where we can compare the claims of Acts with external evidence, it fares well. This becomes most clear in the (roughly) second half of Acts, where Roman sources and especially Paul’s letters often corroborate Luke’s claims.
Posted by Matthew D. Montonini at 12:02 PM

Matthew, do you know if Craig intends to produce a one-volume edition of his Acts commentary (on the order of the one by C.K. Barrett that was based on his 2-volume ICC commentary)? I'd love to have access to his research on Acts, but I just can't afford to purchase the 4-volume set. Thanks.