Francis Moloney's Love in the Gospel of John: An Exegetical, Theological, and Literary Study

One of the coolest moments I have ever experienced in my scholarly life was a message that I received from Francis (Frank) Moloney late last August on FaceBook. He asked if I would be willing to read over some of his manuscript for a book he was writing on John's Gospel that explored the theme of love for Paulist Press. He didn't have to wait for more than a few seconds for my reply! After he sent me a chapter, and then two or three, I suggested to him that Baker Academic would make a better fit, due to the fact that the volume for Paulist Press was for a popular audience, and I believed that Moloney's manuscript was better suited for an academic one.

I was delighted that Frank took me up on my suggestion as well as the comments I made in his manuscript, and the rest, as we say, is history. In November, in time for SBL, Frank's Love in the Gospel of John: An Exegetical, Theological, and Literary Study will be released by Baker Academic. I recommend it warmly to all students of John's Gospel, as it will set the standard for all subsequent work on the theme of love in the Fourth Gospel. Here are the particulars: 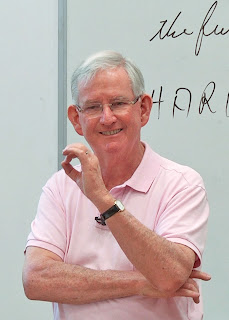 The command to love is central to the Gospel of John. Internationally respected scholar Francis Moloney offers a thorough exploration of this theme, focusing not only on Jesus's words but also on his actions. Instead of merely telling people that they must love one another, Jesus acts to make God's love known and calls all who follow him to do the same. This capstone work on John's Gospel uses a narrative approach to delve deeply into a theme at the heart of the Fourth Gospel and the life of the Christian church. Uniting rigorous exegesis with theological and pastoral insight, it makes a substantive contribution to contemporary Johannine scholarship.

"Francis J. Moloney is one of the most distinguished Catholic scholars of John's Gospel in the English-speaking world today. In his latest work on the Fourth Gospel, he displays his fine gifts as an able teacher. Having absorbed a vast amount of literature on the topic of love in John's Gospel, he presents his own argument in a clear, orderly form that even the uninitiated can grasp." John P. Meier, Warren Chair Professor of Theology, University of Notre Dame

"'Love in Action' could be the subtitle of this very fine study of John's Gospel. Frank Moloney focuses not only on the relational aspects of love--between Father and Son, God and the world, Jesus and disciples, disciples and one another--but also on the performative consequences of this love: what love looks like, particularly in the Johannine Passion. This book reads as the culmination of a lifetime of exegetical skill, research, and lived discipleship, enabling Moloney to express the heart of the Gospel's message in the one word love." Mary L. Coloe, associate professor, MCD University of Divinity, Melbourne, Australia

"Francis J. Moloney is well known for his narrative commentaries on the Gospel of John. In Love in the Gospel of John, he uses his understanding of narrative to explore and interpret the theology of the Gospel. He sees that John tells the story of Jesus as the story of God, who, for love of the world, gave his Son to save the world, and argues that this reality is integral to the Gospel and the source of Jesus' command to 'love one another as I have loved you.' Readers interested in John will want to read this book." John Painter, professor of theology, School of Theology, Charles Sturt University
Posted by Matthew D. Montonini at 12:07 PM