(NB: The first two posts of this series can be found here and here.)

Continuing my exploration of whether Mark contains a High/Divine Christology has thus far produced an affirmative and resounding 'yes' to the question. Of course, such claims need to be nuanced, as Mark is perhaps the most implicit of the canonical Gospels, thereby encouraging a close reading of the texts in question, in what Timothy Geddert refers to as a "connect-the-dots" approach.1 More than likely, the original audiences had little trouble in picking up on Mark's allusive approach, but 2,000 years removed from the original settings in which his Gospel was read or performed has dulled the collective senses of those who approach his narrative. Mark's Gospel has made a significant comeback in scholarly circles as the plethora of commentaries, monographs, articles, attest. However, this comeback has been fairly recent, within the last generation or so, causing the Second Gospel to be sidelined in many discussions of a High/Divine Christology vis-à-vis the other Gospels.

Here, I offer another round of posts concerning Jesus' so-called nature miracles, in particular, the two episodes that demonstrate his mastery of the seas (Mark 4:35-41; 6:46-53). In order to do justice to the overarching question of whether Mark portrays Jesus in divine terms, we will walk through each episode separately over a couple of posts.

At first blush, this episode seems to fit awkwardly as it comes directly after Jesus' teaching in parables (4:1-34). A closer inspection, however, reveals that the whole of 3:7-4:41 are held together by the theme of the boat (3:9; 4:1b; 4:36).2
The scene opens with the narrator shifting the scene as Jesus' teaching has come to a conclusion, and he tells his disciples, "Let us cross over to the other side" (4:35; cf. 5:1). The "other side" being the Sea of Galilee (cf. 5:21-23). The narrator continues, "Leaving the crowd behind (cf. 4:1; 3:9), they(the disciples) took him(Jesus) with them (the disciples) in the boat, and other boats were with him" (4:36). Moloney is probably on to something when he suggests that this last remark ("...and other boats were with him") probably refers to the growing following that Jesus is gathering.3
In true Markan fashion, the narrator wastes no time in describing what happens next: "And a great windstorm (λαῖλαψ μεγάλη ἀνέμου) arose, and the waves were breaking over the boat so that the boat was already filling up" (4:37). As many commentators note, μεγάλη ("great") is a theme that ties this unit together, as after Jesus commands the storm to be stilled, "...a great calm (γαλήνη μεγάλη) arrived" (4:39b). Also, the disciples reaction to Jesus' miracle describes them as "greatly afraid" (φόβον μέγαν; 4:41a).4
Despite the fierceness of the storm, Jesus is in the stern, "sleeping on a cushion" (4:38a). The reader should make a mental note of the contrast that is being set up here, i.e., Jesus' relaxed state as the powers of chaos are tossing his and the disciples boat around. The disciples are perplexed as they wake him and ask "Teacher (Διδάσκαλε), don't you care that we are perishing?" (4:38b). Jesus promptly awakens, rebukes the wind and shouts to the sea: "Peace! Be Still! (4:39ab). The results are immediate as the wind ceases and the sea becomes calm (4:39c). Jesus then rebukes his disciples by questioning their lack of faith (4:40). The narrator concludes the episode by commenting that the disciples fear was "great" (see above) and that they questioned one another, "Who then is this, that even the wind and the sea obey him?"(4:41).

The careful reader of Mark's Gospel may have noticed an episode earlier in the narrative, namely, 1:1-28, where Jesus performs an exorcism on a demon-possessed man in a synagogue in Capernaum. Without rehearsing each verse of the episode and comparing it to our current investigation, 4:35-41, a handy chart will be provided instead: 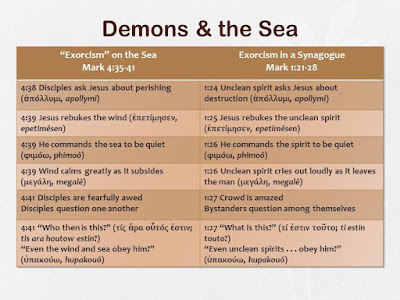 The similarities are striking, and if we interpret one episode in light of the other, it becomes apparent that Jesus treats the seas in the same manner in which he treats the unclean spirit, by exercising his authority over them. Edwards notes that Jesus' command, "Peace/Quiet! Be Still!" is


...the language of v. 39 is, strictly speaking, proper to that of exorcism. The wind is 'rebuked' (or 'censured'). The Gk. epitiman has been used twice earlier in Mark of the rebuking of evil spirits (1:25; 3:12). ...The Greek word for “ ‘Be still!’ ” pephimōso, carries the sense of 'muzzled.' It occurs in the second person singular, as though Jesus were addressing a personal being. Its unusual perfect passive imperative form indicates that the condition shall persist, that is, 'Be still, and stay still.'6


The questions asked at the end of each unit also piques the reader's attention as the identity of Jesus is raised. The reader is encouraged to discover what is perplexing to the disciples with their question, "Who then is this, that even the wind and the sea obey him?"(4:41). To answer this, it would be helpful to see our passage (4:35-41) in light of the Old Testament (OT). To this, we now turn.

The careful reader of Mark's Gospel needs not only to be attuned to how Mark tells his story but also what traditions stand behind his story, namely, the OT. Mark's direct citations may be few, but his entire story is steeped and saturated with the OT in the form of allusions, echoes and the like. To understand Mark then, one must understand the OT. Our passage, Mark 4:35-41, provides a key example of Mark's use of the OT.

Scholars have long recognized that our passage has many resonances with the narrative of Jonah (4:37-38; cf. Jonah 1:4-6). These resonances are mostly at the conceptual rather than the verbal level as this table demonstrates:


In both episodes, a great storm occurs at sea with the boat facing the danger of being sunk or destroyed (Mark 4:37/Jonah 1:4), both Jonah and Jesus fall asleep while the storm is occurring (Mark 4:38/Jonah 1:5), and both are questioned as to why they are sleeping during the storm and asked to do something about it (Mark 4:38b; Jonah 1:6). The similarities are fascinating but the differences are equally striking. First, Jonah is the fleeing prophet while Jesus "is is not fleeing from God but actively involved in the accomplishment of his will."7
Second, in the Jonah account (Jonah 1:6), the captain asks Jonah to call on his God, while the disciples expect no intercession, "Rather, the disciples call upon Jesus even as the distressed sailors of Ps 107,23-30 called upon Yahweh to save them from the storm."8

23 Those who come down into the sea with ships,

making business on many waters,

24 let see them the works of the Lord

and his wondrous things in the deep.

and the waves of it were lifted up.

26 They went up to the heavens and down to the depths;

their soul in evil things was melting down.

27 They were troubled, they were shaken like one who is drunk,

and all their wisdom was devoured.

28 And they cried aloud to the Lord when they were afflicted,

and from their tribulations he led them out.

29 And he established its storm,

and its waves were still (καὶ ἐσίγησαν τὰ κύματα αὐτῆς).

30 And they were gladdened because they were at rest,

and he led them to the care of his will.

The Psalm has as a theme people who find "...themselves in trouble, cry out to Yhwh, find themselves delivered, and are challenged to make their confession of all that." 10

I would argue another telling difference in the accounts is based on the issue of the identity of Jesus and Jonah. For instance, in Jonah, the sailors ask him: "Tell us what is your occupation? And where did you come from? And from which country? And from what people are you?" (Jonah 1:8) Jonah answers: "I am a slave of the Lord, and I worship the Lord God of heaven (κύριον θεὸν τοῦ οὐρανοῦ), who made the sea (ὃς ἐποίησεν τὴν θάλασσαν) and the dry land. Similarly, in the Markan account, after Jesus rebukes the wind and stills the sea (θάλασσα; Mark 4:39), the disciples ask about the identity of Jesus: "And they were filled with great fear and said to one another, "Who then is this, that even the wind and the sea (ἡ θάλασσα) obey him?"(Mark 4:41). Whereas Jonah worships the Lord who made the sea, Jesus commands the sea. The disciples recognition of that command, begs an answer from the reader (4:41).

Who then is this?

The audience schooled in Scripture can supply the answer to their awestruck question. He is the Son of God, who has mastery over the sea, the place of chaos and evil as God does. He has divine power to do what only the God who created the sea can do...11

Mark's implicit Christology leads one to the unmistakable conclusion that the Second Gospel boasts of a High Christology indeed.

2 Francis J. Moloney, The Gospel of Mark: A Commentary (Grand Rapids: Baker Academic, 2002). Moloney states perceptively: "Despite the variety of sources and shifting narrative perspectives across 3:7-4:41, the theme of the boat holds the narrative together. Indeed, the boat is in some ways at the center of the story: will it sink or not?"; 98.

5 Chart provided by Ardel Caneday, from his personal slides in a personal correspondence on February 16, 2016.