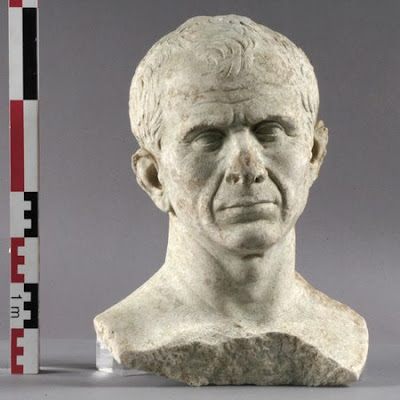 Here is a story I ran across this morning that might be of some interest:

Divers Find Ancient Bust of Caesar
AP
Posted: 2008-05-13 22:29:27
Filed Under: World News
PARIS (May 13) - Divers trained in archaeology discovered a marble bust of an aging Caesar in the Rhone River that France's Culture Ministry said Tuesday could be the oldest known.

Divers found this life-size marble bust of Julius Caesar in the Rhone River. It could be the oldest image of the Roman ruler, the French Culture Ministry said Tuesday. Experts dated the statue to 46 B.C. They said the divers found more treasures in the river, including a marble statue of the god Neptune. Click through the gallery for more achaeological finds.
The life-size bust showing the Roman ruler with wrinkles and hollows in his face is tentatively dated to 46 B.C. Divers uncovered the Caesar bust and a collection of other finds in the Rhone near the town of Arles -- founded by Caesar.Among other items in the treasure trove of ancient objects is a 5.9-foot marble statue of Neptune, dated to the first decade of the third century after Christ.Two smaller statues, both in bronze and measuring 27.5 inches each also were found, one of them, a satyr with his hands tied behind his back, "doubtless" originated in Hellenic Greece, the ministry said."Some (of the discoveries) are unique in Europe," Culture Minister Christine Albanel said. "The bust of Caesar is in a class by itself."This marble bust of the founder of the Roman city of Arles constitutes the most ancient representation known today of Caesar," the ministry statement said, adding that it "undoubtedly" dates to the creation of Arles in 46 B.C.Among other things, researchers are trying to uncover "in what context these statues were thrown into the river," said Michel L'Hour, who heads the Department of Subaquatic Archaeological Research, whose divers made the discovery between September and October 2007.The site "has barely been skimmed," L'Hour told The Associated Press, adding that a new search operation will begin this summer.He said the Arles region, in the Provence region of southern France, with its Roman beginnings, and the Rhone are "propitious" for discoveries.Albanel called the find "exceptional" and said that the Caesar bust is "the oldest representation known today" of the emperor.
Copyright 2008 The Associated Press. The information contained in the AP news report may not be published, broadcast, rewritten or otherwise distributed without the prior written authority of The Associated Press. All active hyperlinks have been inserted by AOL.
2008-05-13 21:47:18
Posted by Matthew D. Montonini at 1:50 PM

At first, I thought "Surely not..." So I checked around other classicists' blogs. Along with them I would say I'm not so sure about this identification. Seems dubious.

Read on at Mary Beard's blog and rougeclassicsm

Thanks. It does seem dubious after reading the expert opinions. It also makes sense why they would try to attach Caesar's name to this find. Anyone else and it doesn't make waves.

nice pictures of Julius Caesar bust discovered in Arles France in 2007 on this website http://www.arles-guide.com/arles_photo_tour/archaeological_exhibition_caesar_the_rhone_for_memory_in_arles