Bob and Bill Mounce: An Interview on Their Innovative Interlinear

(Special thanks to Jesse Hillman of Zondervan for sending me a review copy.) 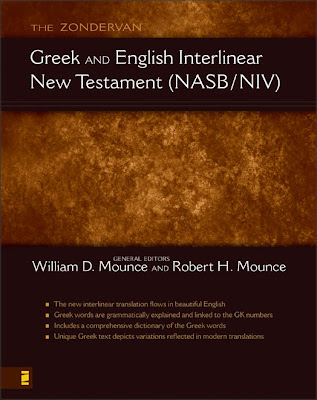 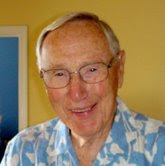 Dr. Bob Mounce (picture on the left) president emeritus of Whitworth College, is the author of a number of well-known biblical commentaries, including the volume on Revelation in the NICNT. Dr. David Hubbard, former president of Fuller Theological Seminary, refers to him as "one of our generation's most able expositors." He was involved in the translation of the NIV, NLT, NIrV, and especially the ESV.

Dr. Bill Mounce (picture on the right) lives as a writer in Spokane, Washington. He is the president of Biblical Training, a non-profit organization offering the finest in evangelical teaching to the world for free. See BillMounce.com for more information. Formerly he was the preaching pastor at a church in Spokane, and prior to that a professor of New Testament and director of the Greek program at Gordon-Conwell Theological Seminary. He is the author of the bestselling New Testament Greek resources, Basics of Biblical Greek, and served as the New Testament chair of the English Standard Version translation of the Bible. (Biographical Info excerpted from here).

Recently, I had the opportunity to ask the Mounce's about a new interlinear they have co-authored, The Zondervan Greek and English Interlinear New Testament (NASB/NIV).

Without further ado here's the interview:


1) Talk about your initial hesitation in producing another interlinear.


Bill: Interlinears can be tedious work. There are so many little things that can go wrong, and what may seem to be a little thing at the time can become something huge if it leads someone to misunderstand God’s Word. I also did not want to perpetrate the myths that there is a word-for-word correspondence between languages and if a neophyte simply knows the Greek word then that is all there is to word studies. I wrote somewhere that it is not a little bit of knowledge that is dangerous but a little bit of arrogance, and an interlinear can enable arrogance.

2) Could you talk about some of the features that make this particular interlinear unique?

Bill: I had hoped we could have called these interlinears “exhaustive,” using the language from concordances, because that is what they are. I wanted as much information in one place as possible to help people study. So there are all the standard features: two running English texts, an English word for every Greek word. But that is about the end of the similarity.

1. The Greek text shows were the major English translations differ from the UBS. You can reconstruct the UBS from my Greek text, but also the Greek texts behind the TNIV and NET Bibles.


2. Dad wrote a great translation that isn’t wooden; it is readable and shows young Greek students how translation should be done. It is a great teaching tool. For an interlinear, it is quite dynamic. For example, it does not use the same English word for the same Greek word but translates according to context. Some conjunctions are translated as punctuation, all as it should be. Typographically, when you are reading Dad’s translation, if you just ignore the superscript italicized words the English makes great sense.


3. Below each English word is its Goodrick/Kohlenberger number. This functions like Strongs number but is a better system. This allows a non-Greek expert to see the Greek behind the English and then do a word study in my Mounce’s Complete Expository Dictionary of Old and New Testament Words (if you don’t mind me plugging my own book).


4. Below each number is the parsing for the Greek word.


5. There is an abridged Greek dictionary in the back.
(Bill Mounce has provided an excerpt from Philippians that can be viewed here. For more information on interlinears click on Bill's website.)


3) Bob, how difficult was it to balance the dual concepts of making a translation make good sense while illustrating precisely how translation work should be done?

That was the major challenge of the entire project for me. Obviously, an interlinear calls for a relatively formal approach. But thanks to Bill’s innovative plan which allows both Greek and English to proceed in a straight forward manner, I was able to make substantial progress toward a more literary English text. I have been involved in about a half dozen bible translation projects with style running all the way from the relatively formal ESV to the more dynamic NLT (and my own first person translation of the Fourth Gospel, “The Story of Jesus: as told by his friend John,” Biblical Training Press, 2004). Since all theological truth must ultimately be based on the Hebrew and Greek texts, I find myself the most enthusiastic about the approach that conveys the meaning of the original in the most accurate and effective way. Revelation involves communication. and communication is served best by a literary process that clearly and accurately says in the new language what was intended in the old. Wherever I carried out the process effectively I believe I demonstrated how translation should be done.


4) Bill, talk about the 4 different Greek texts used to complete this Greek text. What were some of the challenges in coming up with this composite text?

I was fortunate that Zondervan was able to give me a hand-corrected Greek text done by Gordon Fee that stands behind the TNIV. No records were kept for the NIV, and their dynamic theory of translation sometimes makes it hard to reconstruct the text. The NET Bible is wonderful because it shows you with bold daggers where they differ from the UBS. Dan Wallace is a good friend and told me that the Greek behind the NET actually differs at 400 other places, but they are so minor (a de here and a ho there) that they do not affect translation. What was interesting, however, is that the NASB and ETS followed the UBS slavishly. (Dad and I are part of the translation team on the ESV, and the only place we differed from the UBS is in Jude 5 where Metzger says the committee decided on “kyrios” and not “Iesous” for theological reasons, so we went with “Jesus.” I just checked the interlinear, and Dad translated Iesous with “Lord”; I am not sure why.)

5) Finally, how do you envision this interlinear being used and by whom?

Bill: It can service a wide range of people, much wider than a traditional interlinear. For those who know no Greek, they can get to the Greek word and do a Greek word study. They can also compare the three translations to get an idea of what the text not only says but also what it means.For those who know a little greek, it can help them work through a passage.Especially for those with a good working knowledge of Greek, say 2 years, it can help them read large amounts of Greek and see how a seasoned translator handles the text.

Many thanks for this very interesting interview! I came across your blog just yesterday, and have been enjoying reading your posts. I've linked to this interview in my own blog, and look forward to keeping up with your future writing!