My Review of The UBS Greek New Testament 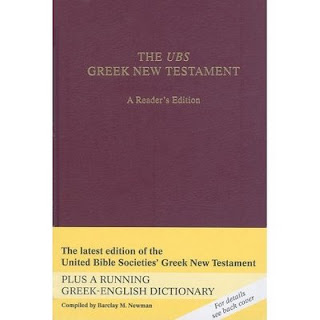 Many thanks are in order to Bobby Koduvalil at Hendrickson Publishers for this review copy!

Many harsh realities exist in biblical language acquisition. As one encounters the biblical languages (Hebrew, Aramaic, & Greek) it is tough not to feel as though one is sojourner in a strange land. Alphabets are at best vaguely familiar, while vocabulary and the different parts of speech can be even larger obstacles for the learner. Once the beginning student begins to read for the first time, syntax and context sensitive vocabulary can be tremendous stumbling blocks. As the student begins to feel more at home with their BHS or NA27/UBS4, the often sad conclusion is that he/she finishes their respective coursework in Hebrew/Greek, never to keep up with the good work that has begun. Many such tools exist to help the student rekindle their biblical language acquisition, some of which I have highlighted on this very blog.


Among the best out there is the recent contribution by Barclay M. Newman as he has provided those students who desire to develop reading facility of their Greek New Testament's. As Philip Towner states in the preface:

"The bottom line is this: to master the skill of reading the Greek New Testament there is simply no substitute for linear and sustained reading. This tool will aid the student and scholar in achieving this goal" (8).

Given the above quotation, one may wonder what makes the Reader's Edition so useful. Well, here are some of the volume's unique features:


Verbs: Present indicative active first person singular, except where only passive and/or middle forms occur in the NT.

On a personal note, while I was teaching my 12 week class on Romans, I found my reading greatly enhanced using the UBS Reader's Edition. Many words I normally would have fumbled over, inhibiting and frustrating my reading, were given a major boost, knowing that I could get through a major discourse without spending an hour getting to the end of the unit, encouraged me greatly. This tool is not a "crutch" if used properly. I agree with Towner's assessment that "This tool will help the reader 'graduate' to independent reading of the UBS Greek New Testament/Nestle-Aland Novum Testamentum Graece sooner rather than later" (8).

I would be remiss if I did not mention one item of concern in closing. I was perusing through 1 Thessalonians 5.26 when I came across the phrase εν φιληματι ̔̔̔̔̔̔̔̔̔̔̔̔̔̔̔̔̔̔̔̔̔̔̔̔̔̔̔̔̔̔̔̔̔̔̔̔̔̔̔̔̔̔̔̔̔̔̔̔̔̔̔̔̔̔αγιω ("with a holy kiss"). I was surprised to find that the noun φιλημα was unnumbered and undefined at the bottom of the page. Since φιλημα only occurs rather infrequently elsewhere (LXX: ʹ̔̔̔̔̔̔̔̔̔̔̔̔̔̔̔̔̔̔̔̔̔̔̔̔Prov 27:6; Song 1:2; Luke 7:45; 22:48; Rom 16:16; 1 Cor 16:20; 2 Cor 13:12; 1 Thess 5:26; 1 Pet 5:14), I was left wondering where else errors may have occured in this work. What is more remarkable however, is that in a task as monumental as the one Newman undertakes, that these kinds of errors do not occur more frequently.

Newman is to be commended for a fine piece of work, one that every student with at least a year of Greek under his/her belt should keep readily available and read daily.

(Disclaimer: I apologize for my lack of Greek accents and breathing marks. I could not get them to work properly!)
Posted by Matthew D. Montonini at 9:16 PM

Matt,
Have you also used the Zondervan Readers Greek New Testament (either edition)? If so how did you feel they compared?
I have the 2nd edition and although the UBS version looks quite solid, I'd need to see enough difference to make it worth the purchace.

I have used the 1st edition of the Zondervan Readers GNT, but I did not care for it as much as the UBS Reader's Edition.

I thinks one reason was simply b/c I did not care for the font style used in the first edition, and secondly, if I remember correctly, the Zondervan Reader's GNT used a modified text not the NA 27/UBS 4.