Gordon Fee and the Thessalonian Correspondence 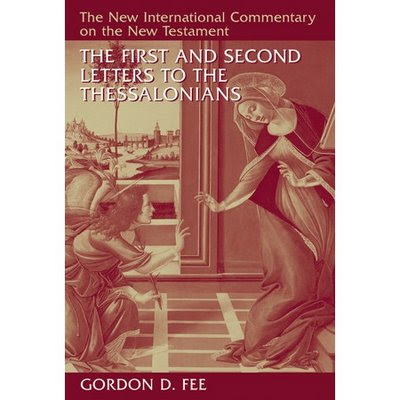 Twenty-two years ago Gordon Fee published his monumental commentary on 1 Corinthians for the New International Commentary on the New Testament series (NICNT: Eerdmans). It is to Gordon Fee's credit as an exegete and a writer, that, to this day, it is considered to be one of the top 2 commentaries on this particular Pauline epistle.

Fast forward 8 years to 1995, now fourteen years ago, Fee penned the commentary on Philippians for the same series. It, too, is considered one of the top 2 commentaries on this particular epistle. Fee's skill as a text critic, exegete, and expositor are some of the reasons his commentaries have stood the test of time.

In 2007, SBL (San Diego), I had the great pleasure of having a conversation with him, and he mentioned to me that he was working on a commentary for 1&2 Thessalonians for the NICNT series, incidentally, for which he also serves as the editor. Apparently, his work is now completed as I have stumbled upon this:

From the editor of the award-winning NICNT comes an insightful, thoroughly readable treatment of Paul's letters of thanksgiving, teaching, and encouragement. Affirming 2 Thessalonians' significance as a stand-alone book, Fee offers a fresh textual exposition of both epistles, addressing authorship, setting, intent, and logic, as well as practical applications for contemporary believers.
The blurb also states that the book is 400 pages long and has a release date of mid-May of this year. I am not sure how true that is, I was not able to track it on the Eerdmans site, but it would be great to not have to wait until November to see this commentary!

I'm sure Fee's commentary on the Thessalonian correspondence will set a new standard as well, so this is truly a must buy!

I agree on G.Fee, Philippians and 1Cor. The most glaring weakness in Fee 1Cor is his textual emendation at 14:34-35 which is a real embarrassment for a textual critic of his stature.

The other 1Cor I assume is Thiselton which isn't so great. Not a greek text commentary at all. Spends one nanosecond in the greek text before doing as his exegesis on the english. It is, to use R.T.France expression, "a commentary on the commentaries". I find it diffcult to even discover Thiselton's reading among all the citations of other authors.

Fee's Philippians was indispensable to me last fall when I was working with a Finnish linguist who was preparing a commentary in Finnish. The more I used Fee's Philippians the better it seemed.

Thanks for checking in. I agree with your point on 1 Cor. 14.34-35.
I never quite understood why he made that leap. BTW-I think he might be planning on revising this commentary sometime down the road. I woonder if his views have changed on the aforementioned passage.

His Philippians commentary is fantastic. Not to mention unlike most commentaries it is a pleasure to read.

It's interesting concerning your point on Thiselton, I think his review of Fitzmyer's latest critiques the latter as not having much new to say.

I like Fitzmyer in general, use his Romans and Acts on a regular basis, Luke sometimes but my quick overview of his 1Cor left me with the vague impression that it wasn't up to his normal standards. This is an impression only, not based on a careful evaluation.

This is exciting news, I heard 6 years or so ago that he was working on this when he came and spoke at Gordon-Conwell. I've always felt like there has never been a top-notch commentary on the Thessalonian epistles. Many good ones, no great ones. Fee definitely has a shot at writing a great one. I hope it comes out sooner rather than later!

Thanks for checking in Danny!

Good to see the review on Fitzmyer.


As far as the Fee commentary, the rep at CBD said that it is indeed due out on May 15th. I just find it strange that Eerdmans has no word of it at all on their site.

Thanks for this I look forward to reading what Fee has to say. As far as 1 Cor 14:34-35, I guess I agree with Fee. The verse seem to interupt the flow fo thought to such a degree that I cannot see them as original. Lack of evidence for an interpulation does not mean that one did not occur.

Just took a course with Fee on 1 corinthians at Regent College in Vancouver BC Canada and I can confirm that he has not changed hi mind with respect to 14.33-34 (and I find myself agreeing with him here more often than not).

I don't think Fee's view on 1 Corinthians 14:34-35 is a weakness at all and I find him pretty convincing (specifically he's excursus on it in God's Empowering Presence). I think it's interesting that Earl Ellis follows him in thinking that it was first a marginal note that eventually made it into the text, yet he just happens to think it was Paul's marginal note instead of someone else. That seems to say a lot about what the evidence shows. Besides Fee isn't the only text critic that takes the view that it is an interpolation. I know Eldon Jay Epp does as well and I think Ehrman might too.

Thanks Matthew for mentioning this. I wasn't aware that it was finished and coming out so soon. That seems rather quick for a commentary in the NICNT series.

Now I'm just looking forward to the ones on Mark, John and Acts.