Frank Thielman and the Quote of the Day

In Frank Thielman's forthcoming commentary on Ephesians, he discusses the subject of election with regards to 1.4-5, particularly with the phrases, καθὼς ἐξελέξατο ἡμᾶς ἐν αὐτῷ πρὸ καταβολῆς κόσμου  ("inasmuch as he chose us in him before the foundation of the universe...; 1.4) and  προορίσας ἡμᾶς εἰς υἱοθεσίαν διὰ Ἰησοῦ Χριστοῦ εἰς αὐτόν("having predestined us for adoptive sonship by means of Jesus Christ for him[self]"; 1.5).
Thielman writes: 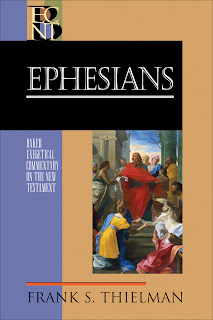 If Paul were engaged in a philosophical discussion about the precise logic of election, and if Ephesians demonstrated an economy of language that made redundancy improbable, one of these explanations might be correct. Paul's focus, however, is not on the logic of election but on its occurrence and the need to praise God because his choice of a people for himself is such a clear demonstration of his grace. Paul's use of language in Ephesians generally, and in this benediction particularly, moreover, is as lavish in its own way as the grace of God, which he praises. Redundancy, then, is not a valid objection to understanding προορίσας ἡμᾶς as a restatement of ἐξελέξατο ἡμᾶς. Paul simply turns the jewel slightly and views it from a different angle, now describing God's primordial action on behalf of his people not as his choice but as his predetermination of them. God determined that they would be his people before the foundation of the world. Their status as his people, therefore, came as an utterly free gift, irrespective of anything they could possibly have done to merit it (51; italics mine).