Brief Reminiscences of I. Howard Marshall

My first SBL (Society of Biblical Literature) annual meeting in 2004 (San Antonio, TX) was memorable for a multitude of reasons. I learned more from that meeting about what not to do-- Spending money you don't have, bring home way too many books, try to book the entirety of my days and nights with sessions, meetings, and parties, leaving no time for reflection and rest. In all, I was an exhausted mess by the time the meeting ended.

Despite my overzealous scheduling, there was one event in particular that I am grateful I attended. On the evening of Sunday, November 21, 2004, InterVarsity Press held a symposium to celebrate the releases of I. Howard Marshall's New Testament Theology: Many Witnesses, One Gospel, along with Eckhard Schnabel's Early Christian Mission (2 volumes). A panel discussion featured both authors addressing the topic: "The Missionary Context of the New Testament and Early Christianity." Unfortunately, I do not recall much of the discussion, but I do recall bringing Marshall's New Testament Theology, which I had just purchased at the ever-tempting IVP book stalls. Once the symposium ended, I made my way up to the front, standing in line to have my book signed by Marshall. I remember his warm greeting, a smile, followed by a handshake, and him asking me after looking at my name tag, "What are you studying at Ashland Seminary, Matthew?" After a brief discussion, he signed the volume, closed the book, and wished me well.

Despite this brief exchange, which for him had to have happened thousands of times over his long, illustrious career, many of them forgotten about on his end, I am certain, his kindness to a stranger, a young, seminary student, was something I shall never forget.  I was brought back to that particular moment yesterday when I heard the sad news that Ian Howard Marshall passed away one month short of his 82nd birthday after a brief bout with pancreatic cancer. For many, Marshall's influence was felt through his voluminous writings, whether they be from his magisterial Luke commentary (NIGTC), his Pastoral Epistles commentary (ICC), his aforementioned New Testament Theology, or his monographs, which included such gems as Luke: Historian and Theologian, The Origins of New Testament Christology, Aspects of the Atonement, among many, many others. For others, those who had the wonderful privilege of studying under him (Craig Blomberg, Ray Van Neste, Joel B. Green, Darrell Bock, to name a few), Marshall's generosity and humility were hallmarks that his students have emulated.

Over the several other SBL meetings I attended in the intervening years, I would see Marshall at some of the sessions, occasionally browsing the book stalls, but never again did I approach him and speak with him. What I observed during those fleeting moments though was a genuine humility and graciousness in dealing with others. I'll give but one example. I was at a session and I believe one of the speakers was Stephen Finlan, a fine NT scholar in his own right, and I remember looking a mere two rows ahead of me, and the great I. Howard Marshall was jotting down notes, like a young student! I thought to myself, "What a wonderful example!" This wasn't just a one-off, either. Marshall took notes for every other paper in the session! I observed him doing this at other sessions over the years, so I believe this was a regular practice for him. He never stopped being a student despite his immense stature in the evangelical scholarly community.

As for what he wrote in my book that fateful night? "Howard Marshall- 2 Tim 2:15".  The passage in full reads thusly: 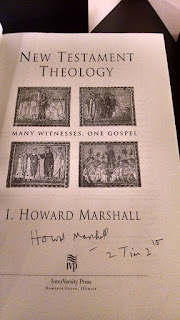 "Do your best to present yourself to God as one approved, a worker who does not need be ashamed and who correctly handles the word of truth."