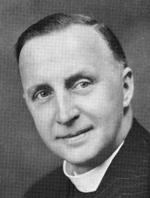 Vincent Taylor (1887-1968), was a preeminent New Testament scholar of his time, serving the bulk of his career as Ferens Professor of New Testament at Wesley College, Headingley, Leeds from 1930-1958. He wrote famous monographs such as Jesus and His Sacrifice: A Study of the Passion Sayings (1937) and The Atonement in New Testament Teaching (1940). As well known as these works were, however, Taylor was probably best known for his magnum opus The Gospel According to St. Mark (MacMillan) published in 1952. Taylor's commentary, although dated, is still considered one of the most valuable commentaries on the Second Gospel to this day, due to Taylor's handling of the Greek text. His approach is now widely used in many commentary series; one thinks of Eerdmans New International Greek Testament Commentary series as well as Harper Collins/Zondervan's World Biblical Commentary series.

I am always interested in the approach a scholar takes when writing a commentary. Many would opine that it is the least creative writing that there is, but to call it artless is a stretch too far. All of the tools that a scholar acquires in his training is challenged by the genre. I was excited therefore to see Taylor's comments in the Preface (v-ix), about what he hoped to achieve. Here are his thoughts on the monumental task of writing a commentary:

I hasten to say that in this work I have no thought of attempting to write a definitve commentary. I am content rather to report progress and perhaps to stimulate others to essay the task. It is not by one commentary, but by a series, that we are most  likely to make real progress. And, for the encouragement of others, I may say that there is no task so rewarding. When we write monographs on such questions as the Parables, the Kingdom of God, or the Son of Man, we read everything germane to such inquiries, but other subjects, which do not make the same appeal, have perforce to be passed by. In writing a commentary this method is not possible. Every theme that arises must be followed, and every line of inquiry into which it opens. The commentator is compelled to be cathollic in his sympathies, international in his outlook, hospitable in his interests (vi; italics mine).

Although the reflections may be more than 60 years old, the same holds true for the commentator today. To boil it down, the commentator, using every tool in their exegetical holster, must still follow the text, allowing it to dictate where the writer goes.
Posted by Matthew D. Montonini at 8:52 PM