Stories With Intent: An Interview with Klyne Snodgrass 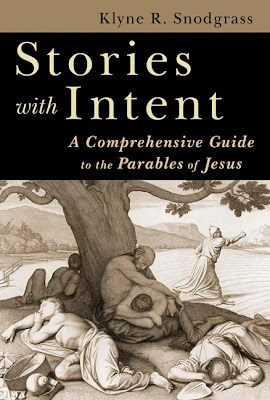 As many of you know, Klyne Snodgrass, Paul W. Brandel Professor of New Testament Studies at North Park Theological Seminary, has recently written his magnum opus, Stories with Intent: A Comprehensive Guide to the Parables of Jesus, surely to be the seminal work on parables for years to come.
Before this interview gets started, I would like to thank the kind folks at Eerdmans, (esp. Lara Sissell) for their generosity in sending me a review copy of this book, and of course Klyne Snodgrass, a true gentleman and a scholar, for taking time out of his busy schedule to agree to this interview.
Now, on to the interview!

1) On a personal level, how has your academic career and ministerial
life in the church been shaped by the parables of Jesus?

First, the parables have been part of my life for a long time, even though I did not start out feeling like I had to work on parables. In my dissertation I had done a chapter on the parable of the Wicked Tenants, which later became a book on that parable. Parables have been part of my teaching for the last thirty-five years, being taught every other year. Frustration with what was available as a text led me to think about doing a book, but I had no idea it would take so long or take just the shape it did. About seven or eight articles on parables came out of the process as well.

Obviously my preaching has focused on parables as well. The themes of hearing, seeing, and acting in response to the parables and the rest of Jesus' teaching became primary themes. These subjects became quite personal for me because I realized how easy it is for all of us to hear but not perceive, to see but not notice, and to acknowledge but never perform.


2) In Stories with Intent: A Comprehensive Guide to the Parables of
Jesus you have written a book that you describe as an
"unapologetically and quite consciously a selfishly motivated book"
(xi). What was deficient in other treatments of Jesus' parables for
teaching and preaching and how have you sought to rectify the problem?

The title is a protest. From the early days of the church to today people have done what they will with the parables to make them serve every purpose imaginable, but Jesus, like prophets before him, told parables with a prophetic intent to confront, challenge, and enlighten God's people. I have given a pretty full report of what others have done, but I have tried to see the parables within the larger context of Jesus' ministry to Israel. If we do not hear Jesus' intent, as hard as that may be at times, why are we even reading the parables?

3) I found it fascinating that you mention in the book that in the
hands of Jesus parables are "prophetic instruments" (8). Can you
elaborate on this point?

Nearly all the parables in the OT are in prophetic books or in the mouths of prophets as recorded in the historical books. They do not occur in legal material and rarely in writings like the "poetic" writings, even though mashal is frequent in wisdom, and, I think it is fair to say, has its origin in wisdom. Mashal, of course, covers a very wide swath of material. Why did prophets use parables? They used them because parables are indirect communication, which allowed prophets to catch hearers/readers off guard—to wound from behind, as Kierkegaard put it. When not so confrontive, parables offered a lens to enable clearer understanding.

4) As far as methodology with regard to the study of parables is
concerned, how do you differ with others, primarily with the so-called
category "example story"?

Like a number of others who work on parables, I had to conclude finally that example story just was not adequate. Other parables give examples as well, and these stories are not different in form from other parables. I call them single indirect because whereas most parables use double indirection—they are not about the hearer or the subject of concern but someone else and another concern (someone finding a treasure, for example), these are not about the hearer but someone else (e.g., the rich fool) but they are about the subject of concern (in this case, money).

5) I remember in your essay "From Allegorizing to Allegorizing: A
History of the Interpretation of the Parables of Jesus" (The Challenge
of Jesus' Parables, ed. Richard Longenecker, [Grand Rapids:Eerdmans,
2000]) you mentioning that more work needed to be done on Greco-Roman parables and their relevance for understanding Jesus' parables (19). How has "Stories with Intent" filled that void and what light has been shed on the similarities/ differences of Greco-Roman parables to
those of Jesus?

The void has not been filled. I make no claim to have done the topic justice, but I have shown how parables were used over a period of time by a hand full of writers. There are close parallels to the form of Jesus’ parables, not least with the “Who from you” (tis ex hymōn) parables. Both Greco-Roman and Jesus’ parables expect a negative answer to the question in all cases. With the Greco-Roman parables it is especially philosophers who use them to confront and enlighten.

6) Klyne, you certainly have done the academic and lay communities a
service with this work. One final question. If you had to summarize in
a short amount of space what Jesus sought to do/teach in his use of
parables what would you say?

Jesus wanted to show people what the kingdom was like both as present and as a coming reality that would bring separation and judgment. He wanted to confront the nation and call it to repentance and productive living in relation to God and in keeping with the two love commands. He wanted to engender hearing of God’s word, prompt actual seeing of people and their needs, and elicit response in obedience to the kingdom.
Thanks for your time, Klyne!
Posted by Matthew D. Montonini at 11:35 AM

A great interview! I enjoy these spots very much.

Hi Mathew I'm Anna, a Th. M student from Taipei, Taiwan. I'm looking for the book reviews on Snodgrass'Stories with Intent, so far I am not very fruitful but only found one academic reveiw by Ernest van Eck. I read that you have read the review before you had an interview with Snodgrass, so is it possible that you can help me to access this review. I can try to find it in the journals at my seminary library. Thank you.