Are You the One Who Is To Come? Review Part II 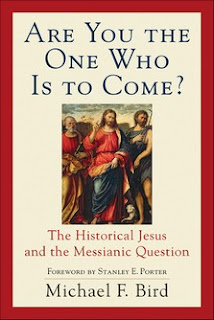 Bird, Michael F.
Are You the One Who is to Come?: The Historical Jesus and the Messianic Question.
Grand Rapids: Baker Academic , 2009.

For Part 1 of this review, click here.
When we last left off in chapter 3, Bird carefully and systematically dissected the objections made by scholars that Jesus did not understand himself to be the Messiah of Israel. One of these objections in short, emphasized that the Gospel authors mined OT texts to find, or as Bird colorfully states "ransacked" them in order to find proof of Jesus's messiahship. Bird finds it inconceivable that scholars quickly dismiss the possibility that Jesus himself could have acted out OT stories and patterns deliberately in order to define his role as Messiah (e.g. Zech. 9; 76).

Chapter 4 (77-115) follows this latter point for the author as he discusses among other things, the thorny Son of Man debate. After examining what significance בר אנשא held for Jesus, Bird states:
"...the son of man figure of Dan.7 contributed to the construction of a messianic narrative; it was capable of sustaining a messianic interpretation and was occasionally interpreted as messianic in pockets of pre-Christian Judaism, and Jesus's employment of the phrase taps into that background" (84).
Bird also discusses Jesus's identification being in line with the "anointed one" that 4Q521 and Luke 7.22/Matt. 11.5 discuss in their drawing from Isa. 35.5-6; 61.1. These texts describe the Messiah performing a series of deeds in which "it is highly probable that Jesus regarded his ministry as demonstrating that the messianic signs of deliverance were present, and that forms an all-sufficient answer to the question posed to him by followers of John the Baptist" (104). The chapter concludes with Jesus's identification with kingship due to his teaching on the Kingdom of God, allusions to David and Solomon (104-109) and the "I Have Come" sayings (109-114).

Chapter 5, entitled "Messiah Jesus-A Crucified Messiah?" (117-160) cover a number of important topics. For brevity's sake, I will just mention two significant points in this chapter. The first point is that Bird argues, rightly in my estimation, that Jesus's triumphal entry and demonstration in the temple were "implicit messianic" acts that caused the Judean leadership to move against him (123). Regarding the triumphal entry (Matt. 21.4-5; John 12.14-15; cf. Zech 9.9) and other messianic acts taken from Zechariah, Bird astutely states:

There can be absolutely no reason why Jesus could not model an action based on events found in Israel's sacred traditions. In fact, several threads from Zechariah may have been programmatic for Jesus. Taken together, the use of Zech. 9:9 (triumphal entry), Zech. 14:21 (temple episode), and Zech. 13:7 (passion prediction) provide a coherent and plausible context indicating that Zechariah was the script that Jesus sought to follow in his final days in Jerusalem(124).

The other point that Bird makes in this chapter, is that it makes little or no sense that the church would retroject messianic status back to Jesus independent from his own actions. In other words, the church did so, due to Jesus's actions.
The messianism of the early church was not an impromptu add-on to disappointed hopes; instead, it issued forth in a comprehensive reconfiguration of the Jewish belief mosaic on topics such as kingship, vindication, eschatology, restoration, and the fate of the nations. The messianism of the first Jesus followers was not merely the Christianization of a homogeneous and extant Jewish messianic myth; rather, it involved the redefinition and transformation of a selection of pluriform exegetical traditions and apocalyptic narratives around Jesus (150).

The final chapter, 6, "Toward a Messianic Christology" concludes with another Bird gem.
Jesus is the goal and fulfillment of the Jewish Scriptures. The person of Jesus links the story of the church to the story of Israel. He is the supreme mediator between God and humanity. Furthermore, Jesus is for the Gentiles only because he was first (and continues to be!) a servant to Israel. He is the royal and divine Son of God only because he is also the suffering Son of Man. Here is the confession not only of the Johannine network but of all Christians: 'We have found the Messiah!' (167).
In my estimation, this is the best primer on Jesus and the messianic question. First, Bird deftly leads the reader by the hand in summarizing the history of scholarship on this question, and provides a treasure trove of important extra-canonical texts (often quoted rather than referenced!) that shed light on messianism in Second Temple Judaism. Second, Bird writes with an engaging style, making complex arguments easy to follow. Bird also represents the ideas of those he disagrees with fairly and charitably. Lastly, I believe Bird has come at this subject from the right angle, eschewing any attempt at analyzing Jesus's self-consciousness, but rather analyzing Jesus's self-understanding, which can be demonstrated much more readily by evaluating his actions, rather than guessing at his mental state.
This book should be in the hands of every seminary student who wants a better grasp on what calling Jesus "Messiah" actually means!
Posted by Matthew D. Montonini at 8:42 PM