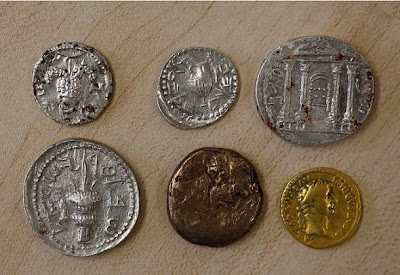 The largest cache of rare coins ever found in a scientific excavation from the period of the Bar-Kokhba revolt of the Jews against the Romans has been discovered in a cave by researchers from the Hebrew University of Jerusalem and Bar-Ilan University.
The coins were discovered in three batches in a deep cavern located in a nature reserve in the Judean hills. The treasure includes gold, silver and bronze coins, as well as some pottery and weapons.
The discovery was made in the framework of a comprehensive cave research and mapping project being carried out by Boaz Langford and Prof. Amos Frumkin of the Cave Research Unit in the Department of Geography at the Hebrew University.

In total, 120 bronze, silver, and gold coins were discovered within a hidden wing in a cave. For more on this story see here.
(HT: BiblePlaces Blog)
Posted by Matthew D. Montonini at 10:17 AM

Wow, why don't I ever find anything like this?