In the preceding post, I considered the juxtaposed clothing imagery of John the Baptist and Jesus in (1:6,7). Today, I would like to return to the announcement that John makes concerning his ministry vis-a-vis Jesus in 1:7 and how that might relate to what is taking place in the narrative of Mark 2:1-17.

Mark recounts that John is ministering around the Jordan River (1:5) and that he is "proclaiming a baptism of repentance for the forgiveness of sins"(κηρύσσων βάπτισμα μετανοίας εἰς ἄφεσιν ἁμαρτιῶν; 1:4). Mark records that those who lived in Jerusalem and throughout the Judean region were being baptized by John in the Jordan River and were "confessing their sins" (ἐξομολογούμενοι τὰς ἁμαρτίας αὐτῶν; 1:5). After a description of John's apparel in 1:6, he makes the proclamation in part, "One who is more powerful (or 'the stronger one'; Gk. ὁ ἰσχυρότερός) than I is coming after me..." and this stronger one will surpass John's water baptism, as he will baptize with the Holy Spirit. This 'stronger one' in this instance is of course, Jesus. Hold on to this picture as we skip ahead to chapter 2.

In chapter 2, we discover that Jesus is in Capernaum where we are treated to the memorable story of the paralytic being lowered through the roof by his four friends into the house in which Jesus is staying (2:1-11). The climactic moment occurs in 2:5 where Jesus observes the faith of the men and tells the paralytic, "Child, your sins are forgiven"(τέκνον, ἀφίενταί σου αἱ ἁμαρτίαι.) The scribes, who apparently observe this moment, immediately charge Jesus with blasphemy. After all, they question, "Who is able to forgive sins (ἀφιέναι ἁμαρτίας) except God alone?"(2:7). Jesus responds by asking their question with one of his own, "Which is easier to say to the paralytic, ‘Your sins are forgiven,’ (ἀφίενταί σου αἱ ἁμαρτίαι) or to say ‘Get up and pick up your stretcher and walk’? (2:9) Jesus continues, "But so that you may know that the Son of Man has authority on earth to forgive sins,(ἀφιέναι ἁμαρτίας)—he said to the paralytic— 'I say to you, get up, pick up your stretcher, and go to your home.'" (2:10-11)

Forging ahead to the next scene, Jesus calls Levi to discipleship and subsequently meets in his house to eat with other tax-collectors and sinners (ἁμαρτωλοὶ; 2:13-15). This sets the stage for another confrontation with the scribes who once again witness this scene and question, "Why does he eat with tax collectors and sinners (ἁμαρτωλῶν; 2:16)?" Jesus' response is revealing, "Those who are healthy (i.e. 'strong'; Gk. οἱ ἰσχύοντες) do not have need of a physician, but those who are sick . I have not come to call the righteous, but sinners(ἁμαρτωλούς; 2:17)." 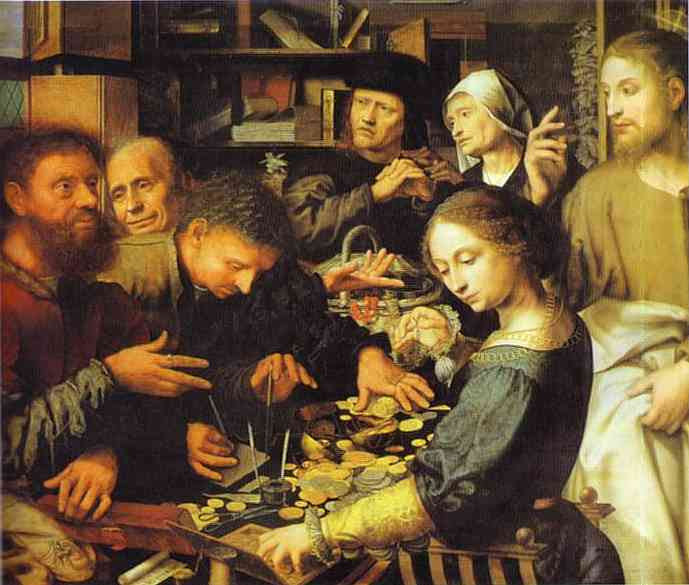 Okay, so now, finally to the point of this post! Notice, one, that John the Baptist's ministry was self-described as a "baptism of repentance for the forgiveness of sins" (1:4) John admits that Jesus' ministry as the 'stronger one' (ὁ ἰσχυρότερός) will surpass his own (1:7). This implication of the superiority of Jesus' ministry of the forgiveness of sins is borne out in the healing of the paralytic, as Jesus confronts the scribes on their charges of blasphemy (2:1-12). When the scribes criticize Jesus' table-fellowship in the next scene, Jesus responds as the 'stronger one' (see 1:7), that those who are healthy, strong (οἱ ἰσχύοντες; 2:17) have no need of Jesus, but those who are sick do, and those who are strong (i.e. the scribes and those like them) are referred to sarcastically as the 'righteous' while those such as the tax-collectors, represented by Levi know they are sinners.

So the question: Could it be that Mark utilizes the same terminology referring to Jesus in 1:7 as the ὁ ἰσχυρότερός and presumably the scribes and other self-righteous groups as the οἱ ἰσχύοντες to make the point that the problem with those who consider themselves healthy and  strong is their attempt to supplant the 'Strong one', i.e., Jesus in matters of forgiveness, table-fellowship and the like?


Sorry for the length of this post, but I'd be happy to hear what you have to say!