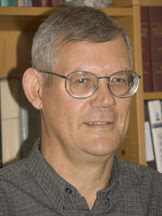 In the now-famous N.T. Wright interview with Trevin Wax, the latter asks Wright about his critics concerning the New Perspective such as D.A. Carson, John Piper, and Doug Moo. See what Wright has to say concerning Moo:

Moo is in a different category again. Doug Moo, I would say, is a much greater Pauline scholar than either of the two I just mentioned. One of the things I really respect about Doug Moo is that he is constantly grappling with the text. Where he hears the text saying something which is not what his tradition would have said, he will go with the text. I won’t always agree with his exegesis, but there is a relentless scholarly honesty about him which I really tip my hat off to.


Incidentally, there are several fine resources of Doug Moo's that can be found online. First, his paper "Nature in the New Creation: New Testament Eschatology and the Environment" presented at the Center for Applied Christian Ethics (CACE) Spring conference (2007) in Wheaton is available, along with an MP3 of the lecture. Secondly, SermonIndex.net has four MP3's of expostions Moo gave on Colossians at the John Bunyan Conference (2006). Finally, Moo has a really cool website that he shares with his wife, Jenny that details their world-class photography of beautiful nature scenes. One can even order a print for his/her home! Included on this website his a link called "Doug's Biblical Studies" where one discovers some of Moo's forthcoming projects such as a Colossians/Philemon commentary for the Pillar series, Galatians for BECNT, and a Pauline Theology for Zondervan!

As an aside, I am always delighted when someone of Moo's caliber makes some of their writings/lectures available online. It really gives a boost to academic interaction. Way to go, Doug!
Posted by Matthew D. Montonini at 12:24 AM