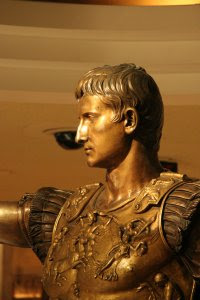 "Jesus is the One who has the message of 'the good news of the kingdom of God'(Lk 4:43), the reign of peace which shows the pax-Romana up for what it is--in words placed on the lips of the chieftain of the British tribes, 'to violence, robbery, and rapine they give the lying name of 'government'; they create a desert and call it 'peace'" (Tacitus Agricola 30; quoted from deSilva, An Introduction to the New Testament, 329).
All the discussions swirling around the blogosphere concerning Paul's gospel vis-à-vis Caesar's, or more specifically Barclay v. Wright after the recent events at SBL, have got me recalling other useful items I have read on the topic.

Scanning my library, I came upon a relevant quote to the debate from Michael Gorman in his Apostle of the Crucified Lord. It should be noted that Gorman and Wright are very similar in their approach to this subject, but nevertheless this quote is worth presenting in full:

Augustus was the bringer, and his successors the guarantors, of peace and security--in a word, of salvation. This was his 'evangel' or good news (euangelion/euangelia), as an inscription from 9 B.C. at Priene, not far from Ephesus in the province of Asia, asserts about the Savior(sotēr) Augustus:
'[S]ince the Caesar through his appearance(epiphanein) has exceeded the hopes of all former good messages (euangelia), surpassing not only the benefators that came before him, but also leaving no hope that anyone in the future will surpass him, and since for the world the birthday of the god was the beginning of his good messages (euangelia)...' This inscription echoes the sentiment expressed by Horace in poem (Carmen saeculare) written in 17 B.C. for games in honor of Augustus: 'Already faith and peace and honor and ancient modesty and neglected virtue have courage to come back, and blessed plenty with the full horn is seen.' Similarly, a sheperd's speechin Virgil's Eclogues (1.6-8) contains this claim about Augustus: [I]t is a god who wrought for us this peace--for a god he shall never be to me; often shall a tender lamb from our folds stain his altar.'

As magnificent benefactors, Augustus and his imperial successors were given (or took themselves) titles such as Savior, God and Lord. The emperor was 'equal to God' (cf. Phil 2:6 where this is predicated of Christ). Although most emperors did not require the actual worship of themselves as a god(notable exceptions being Caligula [Gaius], who ruled from 37 to 41, and possibly Domitian, who ruled from 81-96), the power and might of the imperial office made each of them recipients of godlike honors simply by being emperor of Rome.

Jews(and thus the earliest 'Christians') enjoyed exemption from certain aspects of Roman life, including the imperial cult. Needless to say, however, any movement or message that appeared to displace the emperor from his throne would be understood as counterimperial and anti-Roman (cf. Acts 17:1-9; pp.17-18).