Thomas Schreiner on the 'Center' of Paul's theology 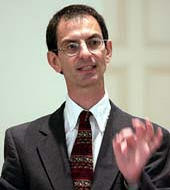 Here is Thomas R. Schreiner's proposal for the 'center' of Paul's theology:

The image of a house may help us visualize the heart and soul of Pauline
theology. ...The illustration of a house is used here because it is suggestive
in conceiving of Paul's theology not because Paul himself supplies such an
illustration. No analogy fits perfectly when we try to communicate the Pauline
gospel. Visualizing Paul's thought in terms of the building of a house provides
an entry point into Paul's thought, a doorway through which we can enter into
his worldview.The foundation of the house is God himself. From him the house
takes its shape, and it is utterly dependent on him for its growth. The house in
this illustration represents God's saving plan in history, and that plan
includes the role of church in history. God is the foundation for all that
occurs, 'because from him and through him and for him are all things. May the
glory be his forever' (Rom 11:36). ...One advantage of thinking of God as the foundation is that the other teachings of Paul are not then conceived as concentric circles that are farther and farther from the center. Whether Paul thinks of justification, reconciliation or sin, they are all based on the foundation; they are not separate from the foundation, nor are they far removed from it. They are themes that frame the house and give it detail, but all these themes depend on the foundation. Since God is the foundation of the house and it depends on him for its survival, he deserves honor for the building of the house.

Well, what does one make of this 'center' in comparison to Thielman's? Thielman, if one remembers, stresses that in order to flesh out the 'center' of Paul's theology, Paul himself must be explicit in its importance to him. On the other hand, Schreiner states that the illustration of a house is not one in which Paul himself uses, but rather is useful for illustrating the 'center' of Paul's theology. Both are in agreement that themes such as justification cannot solely be the center of Paul's gospel. For Thielman 'justification by faith' is too specific to be helpful, and for Schreiner justification is one of the frames of the house, but God and Christ are alone the foundation. For Thielman "God's graciousness toward his weak and sinful creatures" summarizes the center of Paul's theology (232), while Schreiner maintains that the house imagery captures the various foci of Pauline theology, namely God and Christ, the fulfillment of OT promises in Christ, and the gospel of God which is the "theme of salvation history" (e.g. Rom 1:1; 20).

Let me ask my fellow bibliobloggers to weigh in. What are the strengths and weaknesses of both Thielman's and Schreiner's observations on the center of Paul's theology?

Yes Screiner's analogy of 'house' for salvation and God for 'foundation of the house' proved quite illuminating to my imagination. In all Paul's letters in fact we will find the first paragraph directed to the foundation - God. Such as the one in Ephesians that came up at random when I opened the bible. But I know that in all the others, the pattern is if not identical, very similar. In Ephesians, the letter starts out: 'Paul, by the will of God an apostle of Christ Jesus, to God's holy people, faithful in Christ Jesus. Grace and peae to you from God our Father and from the Lord Jesus Christ.' That's the foundation of the house of Paul's center of theology - God. Not Jesus Christ alone... but God.

The [house] that Paul is building is 'salvation' or as Schreiner writes 'the history of salvation'. I'd say salvation rather then history because Paul is not simply building upon the history but also upon his revelation of salvation. It is salvation that he defends so forcefully in Galatians, explains so methodologically in Romans and develops in Corinthians. So I think Schreiner is right in analogizing salvation with the 'house'. The compartments in the house are various and are addressed by Paul and relate to Christ as salvation has physically accomplished by Jesus. Jesus liberates from sin and the slavery of sin. Jesus replaces the law as the reference point to the status quo of being saved as the law is powerless in saving us but Jesus is powerful. These are the topics of Romans 6-8 in particular. Therefore, Jesus reconnects us to the Father and reconciles us to God as his death for us shows that God loves us.

The theology of the cross is equivalent to the theology of salvation. The cross brings salvation, present now but yet not fully present because time is still running. It will become fully present when time stops and eternity happens. Because time is still running from our perspective as we have not yet entered the gates of eternity, salvation is expressed in terms of time, in terms of the cross of Jesus Christ that happened 'fully' in time. We are still in time and so the leitmotif of 'house' for me will rest on 'theology of the cross' which points to salvation but expresses it 'within time'. The cross for me, as for Paul, means also resurrection... For Paul wrote in 1 Corinthians 2, 2 'I decided to know nothing whilst I was with you except Jesus Christ and him crucified'. 'Cross' for Paul is not only death, but also resurrection.